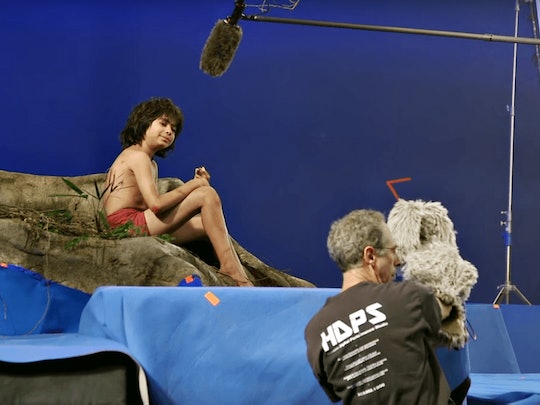 Was 'The Jungle Book' Shot Entirely On Green Screen? The CGI Is Stunningly Lifelike

Disney is getting ready to take on the wilds of the jungle wilderness with the premiere of The Jungle Book in theaters this Friday. Disney has updated the 1967 classic animated film with an all new "live-action" cast — but seeing as how most of the cast are wild animals, how did Disney manage to pull it off? Was The Jungle Book shot entirely on green screen? Technically, yes — but if you want to get specific, it was really filmed against blue-colored screens, so any on-set greenery would provide contrast.

Director Jon Favreau told The Boston Globe that The Jungle Book offered an innovative opportunity, saying, "There’s an opportunity to do something special, thanks to the technology available." Inspired by impressive digitally constructed films like The Life of Pi, Favreau wondered if current film technology could be used "consistently over the course of an entire movie without any photographic reference on the set," in that same interview with The Boston Globe.

If the visually stunning The Jungle Book trailers are any indication, then Favreau and his digital effects team have mastered the art of making a film out of virtually nothing except some sparse sets, savvy green screen technology, and an all-star voice cast.

In the film industry, green screen technology is known as "chroma keying." Actors and portions of sets are placed in front of a solid color set or screen, typically green (in The Jungle Book's case, blue). The colored screen areas are then replaced digitally in post-production with additional backgrounds, textures, and even CGI characters like the many wild beasts in The Jungle Book.

Actor Neel Sethi will make his big screen debut in Favreau's latest film. Even though The Jungle Book features an A-list cast including Ben Kingsley, Idris Elba, Bill Murray, and Scarlett Johansson, Sethi rarely interacted with the stars on the actual green screen set. In the behind the scenes reel above, you can see that Sethi often had to interact with on set character mock-ups such as puppets to achieve the lifelike feel of conversation sight lines.

The Jungle Book production designer Christopher Glass told io9.com in February that some sets were used in addition to the green screens — but rarely in the ways traditional sets are used on movie studio sound stages:

We did build 'slices' of sets—of varying sizes—sometimes no set at all. A lot of the times our sets looked like fashion runways of dirt and jungle with a bigger area for the scenes to play out on one end. Sometimes sets were nothing more than blue shapes and some real branches (just to get the physics of Mowgli’s movements right) which were replaced with CG. A couple of times, we built bigger sets that were more like traditional film sets.

The lifelike CGI action of The Jungle Book has been achieved with a whole lot of impressive digital editing that will definitely be enhanced by its 3-D screenings as well and you should totally see The Jungle Book in 3-D while you can. That said, some think The Jungle Book is too lifelike and scary for kids. Early reviews of The Jungle Book have been positive, and Favreau may have just advanced the way for a whole new era of virtual filmmaking, following in the footsteps of films such as Avatar and The Hobbit.

The Jungle Book opens in theaters across the U.S. this Friday.