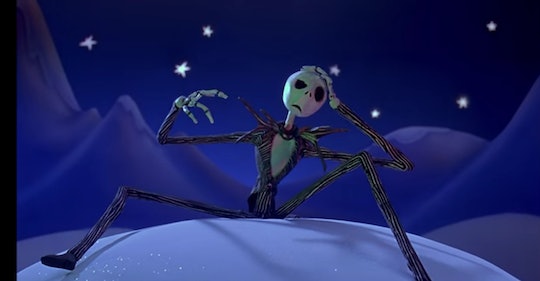 Is 'The Nightmare Before Christmas' Too Scary For Kids Under 5?

As Halloween approaches, so does the slough of spooky movies for kids and adults alike. There are few more classic than The Nightmare Before Christmas, but at what age is the classic spooky film appropriate? Is The Nightmare Before Christmas too scary for kids under 5? If you've never seen the film, it can be easy to press play, unaware of the potential fright it could cause your young child.

The movie is a beloved classic, but it may not be appropriate for all ages. Before we get to the nitty-gritty, a quick plot summary will be helpful for anyone who is unfamiliar with the movie. It's a relatively harmless, slightly spooky tale with a few scary undertones that may give some parents (and their younger kiddos) reason to pause. The film tells the story of the misadventures of Jack Skellington, the king of Pumpkin Town, who gets bored with his normal routine of scaring humans from the "real world." When Jack stumbles upon the much happier, warm-spirited Christmas Town, Jack schemes up a plan to kidnap Santa Claus and take the town as his own. But alas, the best laid plans of skeletons often go awry.

In a lot of the ways Wizard of Oz and Willy Wonka and the Chocolate Factory are scary for some kids (and some adults, that boat scene is freaky), Jack and friends will be too scary as well. It’s got all the happy songs, on a bleak, goth backdrop. It’s emo Christmas at its strangest, and there are definitely some scarier elements.

The film, according to IMBD's Parent Guide, is rated PG for "some scary images." In typical Tim Burton fashion, there are the standard frightening looking monsters, which are usually harmless yet potentially scary images (like the child who wears a hatchet in his head like a hat). Characters (painlessly) take off their own limbs and heads, and there is a villain named Oogie Boogie who could be frightening.

To be fair, Oogie Boogie is pretty darned scary. Both for all the reasons you’re thinking, and all the ones you may not have considered. Both Danny Elfman and writer Caroline Thompson worried that the way that the film was directed would present a racist stereotype, looking like a Klansman, while the name of the character is an old southern derogatory name for Black people. Like many older films, this representation is problematic, and shouldn’t be overlooked.

And apart from that he’s the personification of the myth of the “Boogie Man” made of a glowing burlap sack, with some powers of transformation and magic. However, his spookiness is somewhat abated by his impressive singing and jocular style. Personally, my children never had a problem with Oogie Boogie (too young to understand deeper implications). That doesn’t mean it’s OK for all kids — hence the PG and not G rating.

The website Healthy Children noted that PG ratings simply mean that the film "may contain adult themes, alcohol and tobacco use, some profanity, violence, or brief nudity." The Nightmare Before Christmas contains no profanity, alcohol use, or sexuality, so you can put your mind at ease on that front. The only concern for parents of young children under 5 years old, according to parent forums, is the pseudo-violence and creepy images. Some mothers in the forum rushed to warm moms against letting their kids aged 3 to 5 watch it, while others claimed that their children weren't afraid at all.

However, Parent Co. lists the movie as a must-see Halloween movie for kids under 9, with the author claiming his 4-year-old was "obsessed with it". Clearly, each parent has their own standard about what their children can and can't handle, and each child's personality is able to process different kinds of films earlier than others.

I spoke to some real parents to get their opinions about showing this film to younger viewers, too, and results were fairly steady across the board.

Sam, 29, mom of a 3-year-old and a 5-year-old, tells Romper, “If It weren’t for The Nightmare Before Christmas playing on a loop between October and January, I’d never get any work done. If it’s too scary for them, I expect I’d know by now. I don’t think it’s anywhere near as terrifying as The Witches, and my sister made me watch that as a toddler.” So did mine, Sam, and I’m still not over it.

Erin, 38, a mom and former kindergarten teacher, tells Romper, “If your kid is easily spooked, watch it with them. If you see they aren’t taking it well, turn it off.” Like most things, it’s all about knowing your kids. Mine were both obsessed, but that’s not going to be true for everyone.

It's ultimately up to each parent to decide when their kid is ready to view movies such as these. Although Common Sense media calls the film an "an offbeat, stop motion-animated movie that's one of the great family films for all ages," it also notes that children who aren't old enough to distinguish fantasy from reality (or are prone to nightmares or general anxiety), may need to steer clear until they're older.

If you're unsure of how your child will react, consider watching the movie with them, paying close attention to their reactions and, if needed, pausing at scary moments to ask them to explain how the film makes them feel. Along with the other scary images and themes that circle at Halloween, the movie may or may not add to your child's fear of (or acceptance of) the scary images in the movie.