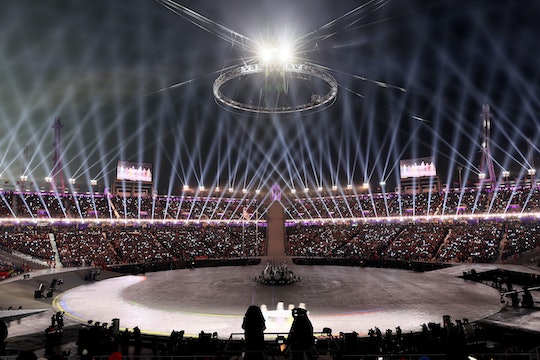 Is The Opening Ceremony Sold Out? The Stadium Was Packed

On Friday, festivities kicked off at the Olympic opening ceremony in PyeongChang, South Korea, with fans crowding into the stadium to watch the show despite the frigid temperatures. From pictures of the event, it looked like the stadium — which is built to hold at least 35,000 spectators — was fully packed. Is the opening ceremony sold out, though, or are there a few seats empty at the opening of the 2018 Pyeonchang Olympics?

The International Olympic Committee did not immediately respond to Romper's request for comment regarding ticketing figures. However, according to Yahoo! Sports and ABC, more than 35,000 fans were expected at the event, which would explain the $109-million stadium's full stands during the opening ceremony.

Tickets for the closing ceremony, however, are still available online. The two cheaper tiers are no longer available (and are likely sold out), but hopeful spectators can still purchase tickets from Tiers A and B starting at $874 and $552, respectively.

Regardless of the numbers at both stadiums, however, spectators can expect to be cold. In contrast to the last couple of Winter Olympics — in which both Sochi and Vancouver organizers scrambled to find solutions for the lack of snow in the warmer temperatures —  PyeongChang has experienced quite the cold snap in recent days.

The organizers' cold-fighting plan, along with a lucky slight respite from the freezing temperatures, seems to have worked. Pictures showed crowds at the opening ceremony, who showed up to witness a pretty spectacular show, featuring an impressive 1,218 coordinated drones, fireworks, and even a shirtless Pita Taufatofua, Tonga's brave flag-bearer and sole Olympic athlete this year. Oh, and North and South Korea marched in under the same flag — you know, no big deal.

Thomas Bach, president of the International Olympic Committee, spoke mainly to the Olympic athletes in the stadium on Friday night, according to The Guardian, saying:

Dear athletes, now, it’s your turn! This will be the competition of your life. Over the next days, the world will be looking to you for inspiration. You will inspire us all to live together in peace and harmony despite all our differences. You will inspire us by competing for the highest honor in the Olympic spirit of excellence, respect and fair play.

Following Friday's opening ceremony, the games will begin, kicking off a medley of winter sports in two different clusters and 12 different venues over the next two weeks. On Feb. 25, after closing out the final women's cross country competition, athletes and spectators alike will meet back in the PyeongChang Olympic stadium to celebrate the victories and best moments of the global event.

Whether you were in the busy, cold stands of the PyeongChang stadium on Friday night or watching the kick-off from the warmth of your home, it's set to be a snowy and exciting Olympics. Here's to catching all the best moments.