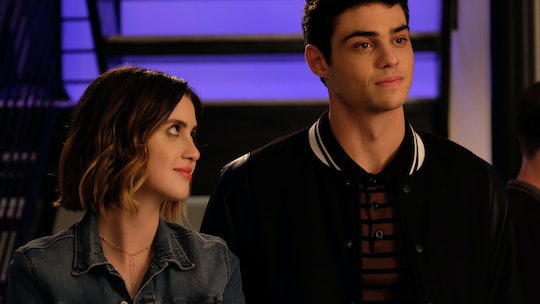 Get ready for a wild ride, because another Noah Centineo romantic comedy is coming, and I can already feel the internet's collective heartbeat racing. On Apr. 12, Netflix drops The Perfect Date, and fans are dripping with anticipation to hear Centineo say "whoa, whoa, whoa," which has become his de-facto catchphrase. But with all the excitement surrounding the star's return to Netflix's rom-com stage, fans can't help but dig into the new movie as well. So is The Perfect Date based on a true story? And more importantly, is the app in the Netflix original real? Just asking for a friend.

Unfortunately for those of you looking for an app to find your own personal Noah Centineo, The Perfect Date wasn't inspired by true events. But the fact that the film wasn't inspired by someone's life shouldn't affect how you see it.

The Netflix rom-com follows a fictional high school student named Brooks, who is doing everything in his power to get into the school of his dreams, Yale University. But Brooks is is missing one thing: money. After meeting the self-assured Celia Lieberman, played by Laura Marano, Brooks realizes that he could be the perfect stand-in boyfriend. Brooks collaborates with his programmer friend, played by Odiseas Georgiadis, and makes an app called "The Stand In" that allows Brooks to become a "chaperone," customized by whoever is paying. But, just as his business is about to take off, Brooks begins to rethink everything he knew before.

Although The Perfect Date won't bring a true story on screen, the film did prompt a real-life reunion between Marano and Centineo, who previously starred together in Disney Channel's Austin and Ally seven years ago.

"He's just, like, the loveliest guy," Marano told Entertainment Tonight. "He has been since he's been 15... We've been there for each other since the beginning. It was so sweet, when we were working on The Perfect Date he kept saying to people... 'Laura's show's the reason I moved to L.A.' But he was definitely making it seem like it was because of my power and I will assure you, I have, like, no power. But I was like, 'Aw, Noah.'"

Marano also revealed that The Perfect Date also had a scene that fans of the Disney Channel show will definitely love.

"One of the things we did on Austin and Ally was awkwardly dance together, which, not planned at all and very coincidental, we do in The Perfect Date," Marano said. "So, it was really fun kind of making that come alive again."

The Perfect Date might sound like your typical teen rom-com flick, but in an interview with Extra, Marano promised that this one will be different, explaining that the film turns a few rom-com stereotypes on their head.

"Listen, it's a rom-com and we all know that rom-coms have a certain formula that happens," Marano said. "But it really does not have your typical rom-com interactions that most of them do. Like there isn't a true jealousy thing that happens, which I feel like happens in rom-coms a bunch where you realize you realize you like someone because they're with someone else and you're jealous. We don't have that in this film."

But what about that incredible love triangle between Centineo, Marano, and Camila Mendes' character that we saw in the trailer? Well, not everything is as it seems on The Perfect Date.

"There's a lot more that happens in the movie that the trailer doesn't show," Marano said when asked about the love triangle. "So I'm excited for you guys to watch it."

Sorry, but if you were only looking for a film based on a true story, The Perfect Date is not it. Regardless, the Netflix film will be a fresh take on the rom-com genre and hopefully bring on some real-life feels.