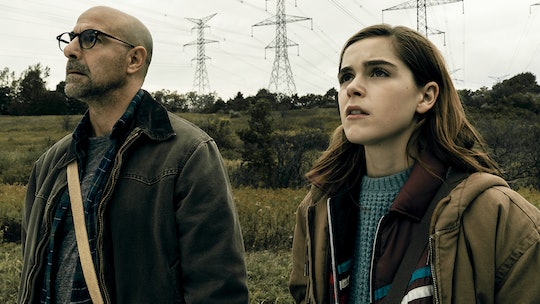 You've Probably Noticed The Similarities Between 'The Silence' & 'A Quiet Place'

If you thought the world was finished with horror films about one of your five senses, boy were you wrong. On Apr. 10, Netflix dropped The Silence, and as the title suggests, the film deals a lot with sound, which may seem eerily similar to John Krasinski and Emily Blunt's 2018 blockbuster. So is The Silence like A Quiet Place? The streaming platform might be trying to channel the success of Bird Box, but it looks like The Silence isn't living up to its Quiet Place comparisons.

Although The Silence and A Quiet Place are supposedly completely different films set in completely different universes, there are a few key similarities that will make horror moviegoers think twice. According to Netflix's description of The Silence, the story focuses on a family that is "under attack from terrifying creatures who hunt their human prey by sound." The Netflix original also has a deaf character, played by Chilling Adventures of Sabrina's Kiernan Shipka, who knows sign language and gives her family an edge in a world in which they need to live silently. Sound familiar?

Although it may seem that The Silence is a rip-off of A Quiet Place, there are still a few differences that set the two apart. According to Decider, the Netflix film is ultimately "darker and gorier" than A Quiet Place, pointing out that the newborn in the 2018 movie survived thanks to Emily Blunt's character while the baby in The Silence was eaten. The publication also explained that the two films have different starting points. As A Quiet Place jumped right into the madness of the post-apocalyptic world, The Silence chose to start before the monster invasion.

What's interesting is that The Silence is based on Tim Lebbon's book of the same name that was published in 2015. Per Engadget, the film adaptation was also green-lit in 2017, which was a year before A Quiet Place appeared in theaters.

The publication also pointed out that in a comment thread on his website, Lebbon expressed his concern in regards to the similarities between his book and A Quiet Place.

While Lebbon saw that the two pieces of work were alike, he stated that he was "confident that the movie of The Silence will stand on its own" and that it would be "epic." However, the author also added, "It is a little troubling, but I guess that’s all I can say about it."

Still, the blend of similarities and differences between A Quiet Place and The Silence don't shield the Netflix film from being called out by Decider and The Guardian for being made to appease fans who are searching for movies similar to A Quiet Place, Bird Box, and even Chilling Adventures of Sabrina, via Netflix's algorithm.

For the most part, reviews for The Silence have been overwhelmingly bad, especially when you compare the film to, well, the movies it has been compared to.

Jordan Hoffman from TV Guide called the Netflix film "baffling on many levels." Meanwhile, Alec Bojalad from Den of Geek explained that The Silence had "a compelling middle without a beginning or end." And Charles Bamesco from The Guardian described it as "the most insidious type of knockoff: the one that sincerely expects you to believe that it’s the real thing." Yikes.

Given the plot, there's a valid reason people are comparing The Silence to A Quiet Place. It's just a shame it doesn't live up to its predecessor.

The Silence is now streaming on Netflix.