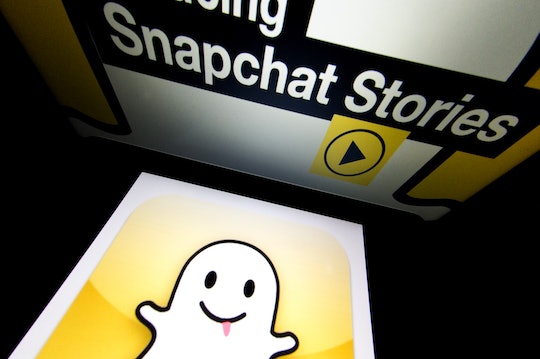 Keep Your Kid Safe During The Snapchat Fruit Game

The thing about Snapchat that makes it so fun for teenagers to use is the feeling that they are able to have private conversations without worrying their photos and videos will be "out there" forever. It's also the reason why Snapchat messages can get pretty raunchy pretty quickly. Over the holidays, a new Snapchat trend has emerged: a game where fruit emojis are used as a sort of code. Is the Snapchat fruit game dangerous for kids? Like anything on social media, it's important for parents to monitor their teens' use.

According to TeenSafe, a resource for parents to educate themselves about social media, the majority of Snapchat's 82 million users are between the ages of 13 to 25 years old. So chances are, if your teen has a smartphone, they're sharing their own videos and messages with their friends. Now that the app has rolled out Snapchat "stories," which are videos that can be viewed by anyone for 24 hours, teens have developed a game where they use fruit emoji to signal their relationship status, according to social media blog Wojdylosocialmedia. A blueberry tells the viewer you're single, a pineapple means it's complicated, raspberry means you don't want to commit, a cherry means you're in a relationship, lemon means you want to be single, and a banana means you can't find the right person, according to Wojdylosocialmedia. There are other similar games that replace fruit emoji codes with candy, or numbers, or other various images, but you get the idea. Anyone watching your teen's story knows exactly what they're looking for in the romance department.

The code varies and keeps getting new fruits added all the time, but the idea was reportedly started by girls who wanted to, according to Wojdylosocialmedia, "confuse" guys.

Because the messages are temporary, Snapchat can give users the sense that there's no consequence to anything they post, particularly for teens. That's why, according to TeenSafe, Snapchat admitted that up to 25 percent of its users could be sending sensitive content, and that 15 percent of teenagers say they've received a "sext" from someone.

The idea that girls are developing codes and tools to communicate their romantic availability ratchets up the possibility for unwanted contact and the sharing of sexually explicit content.

If parents suspect their teenager is being harassed online, according to ConnectSafely, they can contact Snapchat by email to report it at safety@snapchat.com. ConnectSafely also reminded parents that deleting their teenager's account is also a solid option.

ConnectSafely also emphasized the importance for parents to have an open, and honest conversation with their teens about the responsible way to use any of the social media platforms out there. The site also reminded parents to talk to kids, "with genuine interest, not fear," which could be tough if you think your kid is engaging in risky or inappropriate behavior on social media. But try anyway.

So the bottom line is this: The Snapchat fruit game is only as dangerous as your kids decide to make it. The best things parents can do to protect their kids is talk to them calmly about their social media use, monitor them occasionally, and take action when they think a line has been crossed.