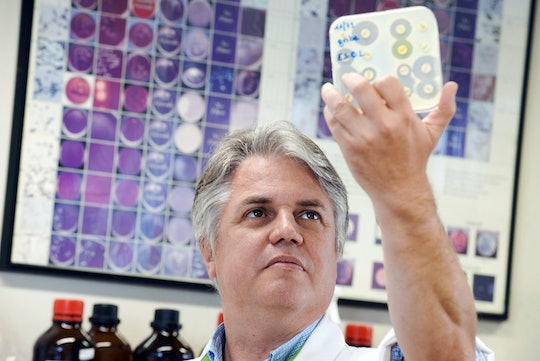 Is The Superbug Contagious? Scientists Have Some Concerns

A particular antibiotic-resistant strain of E. coli was discovered in the United States for, reportedly, the first time last month. This discovery sparked widespread concern, and continued concern from medical experts, who have feared the threat of drug-resistant bacteria. Now that this strain of bacteria has been spotted in the United States, many are likely searching for more information on the bacteria, and the potential of it spreading. So, is the superbug contagious? Well, scientists are concerned about it spreading to other bacteria.

The strain of bacteria, a gene called mcr-1, was found in a Pennsylvanian woman last month, according to the U.S. Department of Health & Human Services. It was the first time scientists and public health officials identified a strain of bacteria in E. coli resistant to colistin, a long-considered "last resort" drug for patients with multi-drug resistant infections, HHS reported.

Dr. Tom Frieden, director of the Centers for Disease Control and Prevention, explained that the mcr-1 gene could potentially be passed from one bacteria to another since it's positioned on a material called "plasmid," according to a report by CNBC. If this happens, then the superbug could join forces with other superbugs, making it resistant to more antibiotics.

"It is the end of the road for antibiotics unless we act urgently," Frieden said according to CNBC.

As far as the potential for anti-resistant bacteria to spread, Laura Piddock, a professor of microbiology in the UK, told Reuters that she believes the use of antibiotics in livestock farming like, polymyxins, which reportedly include colistin (the "last resort" antibiotic) , should be restricted.

"All use of polymyxins must be minimized as soon as possible and all unnecessary use stopped," Piddock said.

The CDC recommends a number of tips for people to help fight off the spread of resistant bacteria like, hand washing to reduce the spread of diarrheal and respiratory illnesses, staying up-to-date with vaccines, cooking food at the right temperatures, and being mindful of raw meat consumption, among other tips.

The mcr-1 gene, first found in people and livestock in China in November 2015, is alarming but not completely hopeless. Frieded explained that the gene was not resistant to carbapenems, which would have classified it as a carbapenem-resistant enterobacteriaceae CRE or "nightmare bacteria."

"It was an old antibiotic, but it was the only one left for what I called nightmare bacteria, carbapenem-resistant enterobacteriaceae, or CRE," Frieden said according to CNBC. A CRE is a family of germs with high levels of resistance to antibiotics, according to the CDC.