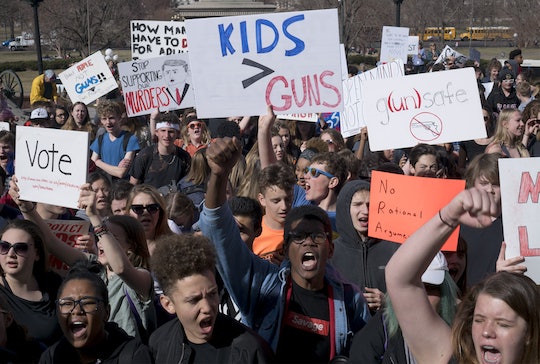 Thanks to a group of hardworking students who survived the Parkland shooting last month, numerous advocates of gun safety will march in the March For Our Lives this coming Saturday, March 24. The march will be headquartered in Washington, D.C., and there will be satellite marches in other cities all across the United States, as well as internationally. And with the rally just a few days away, residents of Arizona are likely wondering: Is there a March for Our Lives in Phoenix?

Like many other cities, yes, Phoenix will be hosting a march as part of the March For Our Lives on March 24. In fact, the city's sister march is being organized entirely by Arizona teenagers, according to The Arizona Republic. The group of students helming the event made a Facebook page for the Phoenix chapter of the march, and as of Monday, more than 4,400 people are "going," and more than 9,200 people are "interested." The march will kick off Saturday at 10:00 a.m. at the Arizona State Capitol, located at 1700 West Washington Street in Phoenix.

"On March 24, kids and families will take to the streets to demand that their lives and safety become a priority and that we end gun violence and mass shootings in our schools today," reads a statement on the Arizona march's website. "On March 24, the collective voices of the March For Our Lives movement will be heard."

The website also notes that the Phoenix march is led entirely by students, explaining:

Phoenix March For Our Lives is an entirely youth led movement. There is not a single person on the planning committee over the age of 18, in fact. Therefore, we are actively looking to recruit new youth organizers, whether in HS or College, to push for change.

The statement is followed by links for youths to volunteer. They can help by registering voters, publicizing the march, scheduling meetings with lawmakers, and more. Additionally, the website is selling Phoenix March For Our Lives merchandise, which will also be available to purchase at the march.

Samantha Lekberg, 16, is one of the Arizona students helping to organize the march. "I can’t help but to see me and my classmates in them," Lekberg told The Arizona Republic, in reference to the survivors of the Marjory Stoneman Douglas High School shooting. "I see my best friends in the victims and I see my family in theirs."

I think it has to do with the fact that we are at the same stage in our lives. We deal with the same things on a daily basis... So young people, now more than ever, understand the issue that’s going on because we are the targets. We are forced to quit being so naive when things like this happen.

Jordan Harb, 17, is another teen activist helping to plan the march. He told told The Arizona Republic:

We all give our thoughts and prayers, but none of them are taking action... It humbles me to see such a huge national movement. People, especially the youth, are sick of seeing shootings regularly. When mass death becomes the status quo, something has gone very wrong.

The March For Our Lives was first conceived in response to the tragic Feb. 14, 2018 mass shooting in Parkland, Florida, which left 17 innocent students and teachers dead. According to the mission statement on the central March For Our Lives website, the aim of the march is "to demand that a comprehensive and effective bill be immediately brought before Congress to address these gun issues." With so many people all across the country planning to participate, it's a good time to be hopeful that Congress actually will address these important issues soon.