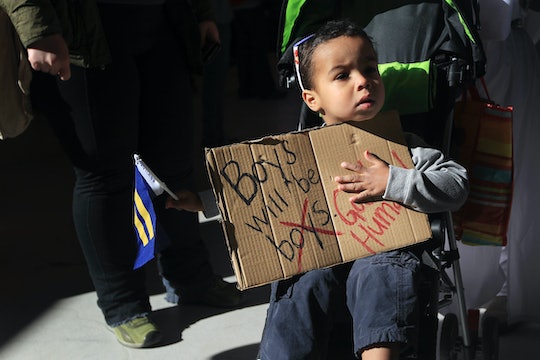 Women around the world show up in force for gender equality marches in major cities. With the 2019 Women's March having been announced in both Washington D.C. and New York City, you may be wondering if there is a Women's March in Los Angeles this year. The LA March is set for Jan. 19; here's everything you need to know to join in.

According to the official Women's March Los Angeles website, the event will be held on Jan. 19 in Downtown Los Angeles. The march will begin on Saturday at 9am PT in Pershing Square and end at City Hall at 4pm PT. Keeping with the Women’s March national movement's goal to "unify and empower everyone who stands for human rights, civil liberties, and social justice for all," the march is expected to draw a diverse crowd, as the L.A. Times reported.

Emiliana Guereca, founder and executive director of Women’s March L.A. told L.A. Magazine that she saw the movement growing in D.C. and rather than travel to Washington she "decided that L.A. needed its own show of democracy, its own march.” She was right. “Last year we were around 600,000 [people],” Guereca explained. “We’re hoping we can be around the same this year.”

While this year isn't expected to draw quite as large of a crowd, according to Curbed L.A., but there will still be about 200,000 marchers at Pershing Square and along the route. As of Tuesday, about 63,000 people have RSVP’d to the Facebook event page. These numbers are will likely lead to street closures Downtown, making driving directly to the march and parking nearby a bit difficult. Those in the local area should plan accordingly and consider taking public transit or ride sharing to the event, Curbed L.A. reported.

Last year's Women's March in L.A. boasted big name speakers like Hollywood celebrities Scarlett Johansson, Laverne Cox, and Olivia Munn, according to the L.A. Times. Political figureheads, activists, and celebrities alike are expected to appear at Saturday's march in L.A. While this year's lineup has yet to be announced, Guereca told L.A. Magazine that she and her fellow organizers aimed to make the event even more intersectional than past years. But even with an effort made to attract diverse voices for the program, Guereca said that there are always limitations on how many people can be featured:

The program is only so long, and we cannot put everyone on stage. Not everybody is going to be happy. But at the end of the day, we have to make sure we focus on our Unity Principles. I think if we are working with our Unity Principles then we’ve done our job.

And the work being done by the Women's March organizers across the country is far from over. It isn't enough to simply march one day a year and go back to your everyday life without making changes, Guerca said:

We don’t want people to just march and go home and that’s it. We want to make sure that they’re plugging into civic engagement. That’s key.

Of course, not everyone in Los Angeles who wishes to support such an important movement for equality. Fortunately, along with physically showing your support by marching on Saturday, you can also donate online to support the cause. And finally, supporters can make their beliefs known to those around them by living out the core values of the movement. Regardless of where — or if — you march this year, treating people like individuals, respecting basic human rights, and speaking up for those who are so often denied their voice makes more of a difference than you know.

This article was originally published on Jan. 15, 2019