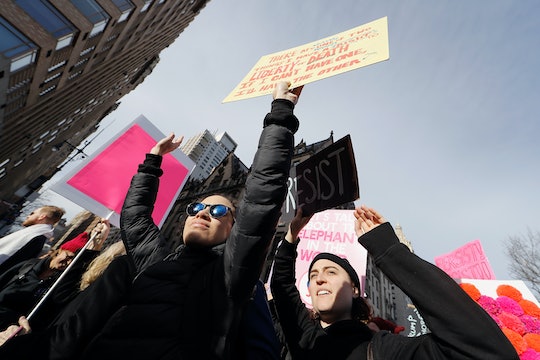 Everything You Need To Know About The 2019 NYC Women's March

For the third year in a row, Washington, D.C. will host a Women's March on Saturday, Jan. 19. Most major cities — as well as plenty of small towns — usually hold sister marches the same day. So, New Yorkers are likely wondering: Is there a Women's March in New York City in 2019? Here's everything you need to know about the annual rally.

Luckily for residents of the Big Apple, yes, there is a march in NYC this year. The march will start at 10 a.m. local time on Saturday, Jan. 19. However, there has actually been a bit of confusion surrounding the plans for this year's New York City Women's March. As the New York Daily News reported, there are two Women's Marches, each with a ton of Facebook attendees, happening on the same day this year.

But according to the official Women's March website, the official chapter of the NYC march will start at Foley Square in downtown Manhattan. The Facebook event for this march explains that it will be focusing on elevating women of color and immigrants this year.

"The Women’s March in NYC will highlight the leadership of Black women, immigrant women and women of color as part of the national #WomensWave, and in response to the Trump Administration’s continued assault on immigrant communities and communities of color," the Facebook event reads.

Additionally, according to a statement from Women’s March NYC, which was published by Essence: “The Women’s March in NYC will highlight the leadership of Black women, women of color, and immigrant women as part of the national #WomensWave, and in response to the Trump Administration’s continued assault on immigrant communities and communities of color.”

Because the official Women's March connected to the D.C. rally only recognizes the Foley Square march on its website, it's safe to say that that one is the main NYC march this year. If you're planning to attend, here is all the basic info you'll need.