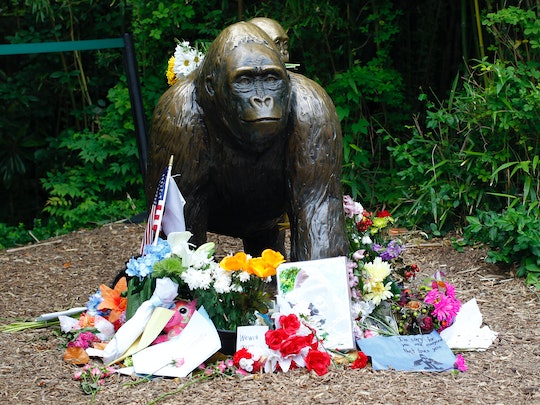 Is There Really A Harambe Emoji? Don't Be Ridiculous

There were gorillas before Harambe existed. There are gorillas roaming the earth to this day, even after the tragic death of Harambe. Which brings me to an important conclusion: Harambe is not the only gorilla in the world to have ever lived. So while the internet is going crazy with the news that there is a new Harambe emoji, it might want to stop and remember that one pivotal point. He wasn't the only gorilla ever, guys.

Apple has just graced us with 104 new emojis, and with the release of new emojis, naturally the emoji-confusion follows. There are a bunch of emojis in this latest crop available in the iOS 10.2 beta update that make perfect sense. Food emojis are popular; Apple introduced a few great ones so you can let your friends know what you're eating: an avocado, croissant, baguette, egg, even a salad (and now I'm hungry). Then there are the animal emojis, and this is where the confusion comes in. While the fox, shark, rhino, bat, eagle, and owl emojis are pretty clear cut, the simple gorilla has everyone screaming Harambe.

Already the internet is abuzz with reactions to the "Harambe" emoji, and come on now. Obviously Apple did not base an emoji on a gorilla who was killed after a boy fell into his enclosure. Because no. That just doesn't happen:

Harambe, as we all remember, was a 16-year-old endangered male gorilla living in the Cincinnati Zoo. A young boy fell into his enclosure, and visitors to the zoo called 911 because they felt the boy was in "life-threatening" danger. In a video released to YouTube, Harambe can be seen dragging the child around. Zoo officials made the decision to kill Harambe to save the child.

So no, Apple did not use the unfortunate death of an endangered gorilla as an emoji. After all, emojis aren't created as simply as a meme. According to The Telegraph, the Unicode Consortium considers several factors in a series of meetings to decide on proposed emojis.

These new emojis must fill a gap left by existing emojis, high interest requests from social media and online communities, and compatibility with emojis that already exist. The Unicode Technical Committee made the final decision for the latest batch of emojis in May 2016. Harambe was killed on May 28, 2016, and the committee had already made its decision by that point, so let's just call this new "Harambe" emoji what it actually is, guys: a gorilla.