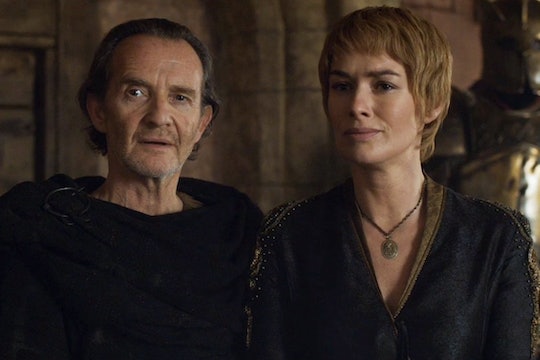 Is There Wildfire Remaining On 'Game Of Thrones'? It May Be Cersei's Only Hope

After Sunday's episode of Game of Thrones, fans everywhere felt a collective letdown when it was revealed that there would be no more trials by combat. I.e., as of right now, no Cleganebowl and no opportunity to see The Mountain bested at battle. But it also meant that Cersei will have to participate in an actual trial, and one that would likely find her guilty. The only thing that can get her out of it now would be some grand distraction, but is there any more wildfire on Game of Thrones? Luckily, Cersei's bestie Qyburn may have an answer to the "rumor" they were whispering about, as they often do.

The original solution to the accusations against Cersei was to have the zombified Mountain be her champion in a trial by combat, defeat whoever was chosen by The Faith with a simple skull crushing move, and move on. Unfortunately, the young King Tommen announced, after discussing it with his BFF the High Sparrow, that the trials of both Cersei and Loras would be held without the option of a trial by combat for anyone. Obviously this gave Cersei an "oh sh-t" moment since that was her only saving grace, but we all know the former queen of Westeros — if she doesn't have something brewing to keep her alive yet again, then someone close to her does.

After Tommen made his exit from the Throne Room like a boss, Qyburn found Cersei and they spoke of this "rumor" that has got to be wildfire, the explosive substance that can blow up pretty much anything. When he brought up a mysterious rumor Cersei had asked him to look into, Qyburn confirmed that not only is this not a rumor but "More. Much more." This leads us to believe that what they were referring to was wildfire, the neon green liquid that destroyed many of Stannis Baratheon's ships in the Battle of the Blackwater under Tyrion's guidance way back in Season 2.

But after all of that, is there any wildfire left on Game of Thrones? Even if they used all of the wildfire hidden under King's Landing, it was said to be what the Targaryen's used in place of dragon fire once their dragons died out during their rule, so there is obviously an alchemist somewhere in Flea Bottom with several batches or, at the very least, the ability to whip up lots of it. We still have two episodes left of Season 6 of Game of Thrones to find out what Cersei and Qyburn's mysterious rumor us all about but if there is wildfire in King's Landing, it would be her ticket out of her trial. And yes, there is some poignant evidence to suggest that there is still wildfire left on Game of Thrones.

It was easy to go crazy over Bran's visions this season on Game of Thrones, since we were able to see Hodor's origin story (don't cry, stop crying) and some glimpses of the Tower of Joy. But remember when Bran was seeing a mixture of things, from the Mad King on his throne to the Night King turning that infant into a white walker? In that cluster of scenes were a couple of alchemists pouring wildfire into a container, presumably somewhere beneath King's Landing. And then an explosion.

We all know said wildfire was eventually used for the Battle of the Blackwater, but following that scene in Bran's vision, we also saw a huge green wildfire explosion underground. And that may very well have been a flash forward as opposed to another flashback.

It Would Allow Another Prophecy To Come True

Along with the prophecy of Cersei seeing all of her children die long before her, there is the premonition of her being killed by a younger brother. The obvious answer to that would be duh, of course Tyrion would probably love to off the terrible ex-queen. But Cersei is also a few minutes older than her twin brother Jaime, making them both her younger brothers.

If Cersei were to try and burn down King's Landing, or just parts of it to get her point across, Jaime could be the one to kill her to save everyone else.

The Idea Has Been Thrown Around Throughout The Seasons

For as long as Cersei has been the passionate and dramatic high-born woman we know today, she has been all about "burning cities to the ground" and threatening to "burn our house to the ground" in honor of protecting her children. Game of Thrones is no stranger to extreme foreshadowing and while Cersei's words may have just been said out of anger or dramatics, you can't deny the possibility of her specific words telling us what she was destined to do (or try to do) someday.

There is also the matter of Dany's own vision back in Season 2 of Game of Thrones showing an empty Throne Room with no roof and falling snow (ash?), which could likely be from an explosion of wildfire.

It's Used More Than Once In The Books

In the show, we've seen wildfire used once to fight Stannis's army during the Battle of the Blackwater, but in A Song of Ice and Fire, Cersei uses wildfire to blow up the Tower of the Hand, thinking Tyrion is in there and still believing him to be the responsible party for Joffrey's death. We haven't seen any other use of wildfire in the show just yet, but if there is wildfire left on Game of Thrones, it will likely be Cersei who makes use of it. Well, Cersei along with her trusty sidekick Qyburn.

There are still two episodes left of Season 6 of Game of Thrones, which is time enough for Cersei to get her house in order before doing something totally crazy to save herself from a trial she's bound to lose. Because as we have seen lately, what the High Sparrow wants, he gets.