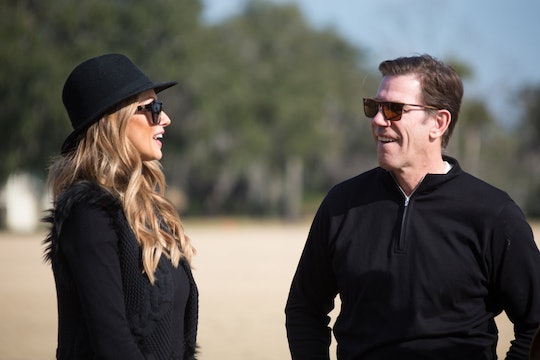 Just because someone has been a cast member on Southern Charm since its humble beginnings doesn't mean they are untouchable. And after multiple sexual assault allegations against Thomas Ravenel came out last year, followed by an arrest for assault and battery, fans wondered what his future was like on the show. He might be an OG, but according to People, Thomas Ravenel is not on Southern Charm Season 6. The magazine reported that the show dropped Thomas last year after the allegations against him started to pile up and a source reportedly told People that the rest of the cast is "happy to be finally be free" of the drama that Thomas brought to filming.

Ashley Jacobs might still be a part of the season, however. She was introduced Season 5 when she stepped in as the would-be step-mom to Kathryn and Thomas’ kids when she dated him. She even packed up her life in California to move across to the country and be with him. But after a season full of fights, awkward dinner parties, and social situations that got way out of hand, the veneer of Thomas and Ashley’s relationship started to crack. They were spotted on and off after filming, but right now it looks like they are broken up and the trailer for Southern Charm Season 6 shows Ashley showing up at least two events to confront the rest of the cast. Even without Thomas around, it is going to one dramatic season.

Although Thomas is currently dealing with his legal troubles, he will still be on Southern Charm Season 6 in spirit. With Ashley popping in on the rest of Thomas’ former friends as a constant reminder of him, his name is sure to come up at least a dozen times per episode.

In the trailer, Kathryn mentions her fears about Thomas potentially going to jail over his assault charges and sheds tears over being a single mom if that happens. The couple has been split up for literal years and they don't seem likely to reconcile any time soon, but Kathryn does seem emotional at the thought of Thomas being in prison.

The news of Thomas being let go from Southern Charm probably isn't all that surprising to most fans. Last year, he was accused of sexual assault by a former nanny and then a Tinder date came out against the Charleston politician too. It wasn't until his September arrest on battery and assault charges that Bravo finally gave him the ax, but he probably won’t be coming back.

In his absence, however, I suspect that Southern Charm will continue to flourish. In the trailer, Austen claims that Whitney and Kathryn hooked up, which will be the first time the two got close like that since the beginning of the series. And Naomie and Austen’s new significant others will be introduced to viewers when Season 6 premieres.

There could be some drama in the land of Shep, as almost everyone in the trailer seems to be on him about being back to the immature jerk fans once knew him as. Maybe there’s still time for him to change his ways. We do have a long season ahead.

Even though Thomas’ drama with Kathryn and Ashley was the driving force of last season and ended each episode with more problems than solutions for the trio, Season 6 will probably be just as juicy. Ashley doesn't seem like she’s going without a fight and Kathryn might actually be able to shine without Thomas looming in the background. Personally, I am ready for all of the usual drama without the messiness of Thomas.

This article was originally published on March 28, 2019