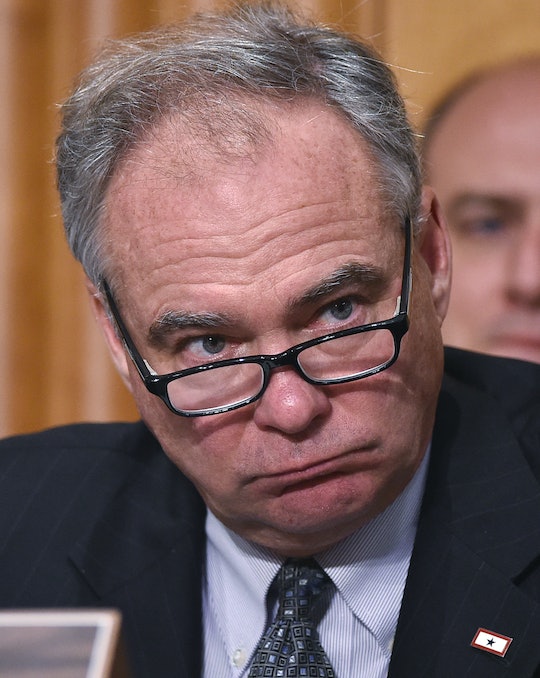 Hillary Clinton has a battle on her hands. As the Democratic Presidential nominee prepares to face off against the notoriously outspoken Republican candidate Donald Trump, Clinton is busy gathering together a team to (hopefully) take her into the White House. There has been much speculation about Clinton's choice for a possible running mate in recent weeks, and it looks as though one choice is leading the pack. While some Democrats are pleased with Team Hillary's possible choice, some are wondering if Virginia Sen. Tim Kaine is more centrist than Clinton? And if he is... will this spell trouble for the Democratic Party's chances to clinch another four years in the White House.

Some Democrats see Kaine as a safe bet. Virginia is a swing state, and Kaine announced his support for Clinton back in 2014 (a full two years before the 2016 election). Kaine was once a Democratic National Committee chairman, and in 2014 received a 90 percent approval rating from the Americans for Democrats Action rating of 2014 votes. Kaine was considered a strong contender to be Obama's running mate. He has a perfect voting record for Planned Parenthood, speaks fluent Spanish and was once considered "too liberal" to win statewide support in Virginia. So why are supporters of former Democratic Presidential candidate Bernie Sanders balking at Clinton's possible choice of Tim Kaine as Vice President?

According to Politico, People for Bernie founder Charles Lenchner is not impressed with Clinton's possible choice. “Tim Kaine would be a perfect addition to the ticket, in that he would add no progressive backbone that might inconvenience Team Hillary when it's time to govern.”

Jordan Chariton, a talk show host for the left-leaning radio show The Young Turks, who also spoke with Politico, agreed. “An establishment Wall Street Democrat like Tim Kaine … will do nothing but confirm to progressives she's learned nothing from this primary."

Kaine himself has poked fun at his centrist, safe persona. In an interview with Meet The Press, he admitted, "I am boring.”

In reality, Clinton will need the support of previous Bernie-backers if she wants to beat Trump. And Kaine doesn't appear to be the choice the estimated 22 million voters were looking for. Radio host Katie Halper of New York told Politico:

Picking Kaine, a centrist, DLC [the now-defunct Democratic Leadership Council] Democrat, who happens to have some scary positions on abortion and the deficit, would just confirm that Clinton is the triangulating, centrist, DLC Democrat who many Sanders supporters have claimed her to be. It would send a message that she's not even pretending to pander to us, which is both refreshingly honest and alarming.

While Clinton has historically erred on the side of caution with her political choices, some political pundits are wondering if choosing a middle-of-the-road running mate like Kaine is a sensible choice after the divisive primaries of 2016. Sanders might have been too far to the left... but is Kaine too close to the middle?