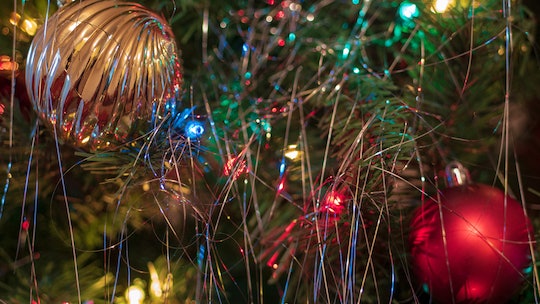 Is Tinsel Illegal? The Sparkly Stuff Has A Pretty Sketchy Holiday History

This holiday season, while you're baking cookies or marveling over your neighbor's Christmas lights, take a moment to appreciate the fact that the jolly holiday is also full of dangers. Christmas trees are combustible; people fall from ladders while decking the halls. In fact, our family has a tradition of waiting for my husband to suffer his annual self-inflicted, holiday-related injury. Sometimes we place bets. While you ponder the inherent dangers of the season, you might wonder about that glittery stuff on your tree. Didn't they make tinsel illegal at some point? (And if so, why?)

Tinsel takes its name from the Old French word estincele, or sparkle, and it is believed that it came into use by the wealthy in the 1600's, according to AOL. Using strips of silver or gold to catch the light, the tony few who could afford such a glittery decoration kept it to themselves until the Industrial Age allowed the manufacture of copper, aluminum and lead varieties. Each had distinct disadvantages, according to The Atlantic. Copper was fun until World War I demanded that it be sacrificed to the war machine, and aluminum proved to be extraordinarily flammable — not a great trait when it adorns a desiccated dead conifer. Tin and brass varieties were also available, but the industry settled on lead as the most viable material to emulate the gold and silver glow popularized by the wealthy.

Until the 1970's when the FDA got wise to the dangers of lead poisoning, lead tinsel — also known as lametta — tinsel was a standard Christmas decoration in American households. However, the heavy metal itself was already omnipresent in homes — paint, jewelry, crystal and even dishes contained lead, according to the Minnesota Department of Health. So it wasn't like tinsel was the most likely object to poison the family. People were literally eating their food off plates laden with lead. In 1972, the agency was finally able to prevent the importation of the toxic filaments, protecting American consumers from a source that was easy to eliminate, according to The Atlantic. The FDA would need another six years to ban lead in house paint and another 16 years to get Congress to pass the Lead Contamination Control Act, but at least the poisonous tinsel remained in Germany.

As explained by Chemical & Engineering News, tinsel is now made mostly from a plastic called PVC, or polyvinyl chloride, and it is not flammable or poisonous. An unfair tradeoff for people who insist it doesn't have the same luster as lead, but those of us who grew up knowing that Uncle Tony can't have babies because he liked to eat paint chips as a tot are grateful. Some people never got over the loss of that sparkly, sparkly lead, so you can still bid on vintage lametta on Ebay (though I would suggest that you concentrate instead on holiday hazards that haven't been rendered obsolete with modern legislation and technology). Hanging holiday decorations will always be a dicey prospect for the clumsy, but a surprising number of Christmas Day injuries result from opening presents, reported Quartz. At least if tinsel is a must-have item for your Christmas tree, you can rest easy knowing that as long as you don't pursue vintage versions, everyone in the family will be safe from lead poisoning.