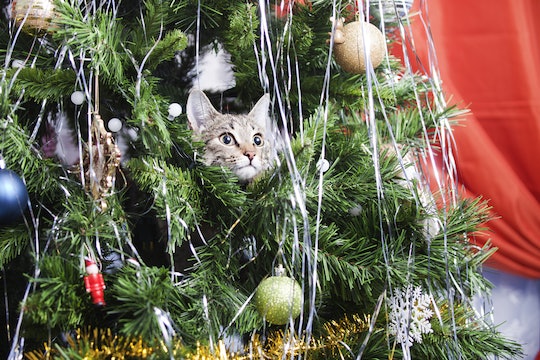 I love my cats. Sure, they're total jerks who chew on everything and knock stuff off the counter just to watch it shatter, but I do love them. Truly. I also adore the holidays. I love all the caroling and baking, and I especially love decorating the Christmas tree each year. One problem: My cats love to terrorize my poor tree like it's their single quest in life. Therefore, I have to make sure everything is as safe as possible for my little befurred devils. I'm always Googling things like, is tinsel safe for cats? Or will I be hitting up the pricey emergency vet if I string it on my tree?

As it turns out, my concern is well-founded. The staff at Bucksburn Veterinary Hospital in Oakville, Ontario wrote in their blog that if a cat (or other pet) ingests tinsel, it can get wrapped up in their intestinal tract and cause serious damage to your poor critter's digestive system. In fact, those pretty, lacy icicles dangling from your Christmas tree are known to get so entwined within your cat's intestines that only surgery can remove the offending strands. And that surgery is not cheap, according to Wag! the pet care app: Foreign body removal surgery involving the intestine can cost anywhere between $800 and $2,000, depending upon where you live and the severity of the problem.

A few years ago, a family friend went away for a few days over the holidays. Like they had every time they went away for the weekend, they left their cats with plenty of food, their automatic watering bowl, and an extra litter box. All was good. They were only gone for two nights and three days total. When they got home, one of their cats greeted them as he usually did, and the other was nowhere to be seen. When they reached their living room, they noticed that it was littered with cat puke. No alarm bells triggered, yet. Sometimes, cats get particularly full of hairballs and this happens. But when they couldn't find their little brown and gray tabby, they started to become worried.

This story does not have a happy ending. They eventually found their youngest cat in the laundry room, barely breathing. They rushed him to the vet, and upon X-ray determined that he'd eaten a lot of tinsel. He never made it to surgery. While this is an extreme example, it's not uncommon, according to Preventive Vet. I know that they wish they could go back and ask "is tinsel safe for cats?" Because they learned the worst possible way.

Preventive Vet warned that all linear foreign bodies (like string, twine, floss, ribbon, and tinsel) present a serious danger to cats because of how easily it can become roped up and knotted in their intestines. However, because tinsel is so shiny and vibrant, cats are particularly attracted to its mylar shine. It might as well be kitty bait for how much they love to bat and bite at it.

How do you know if your cat slurped up a bunch of silvery string? Pet Poison Helpline, a 24-hour poison control center for pets, cautioned cat owners who put up tinsel to take their pet to the vet if they become lethargic, start vomiting, or if they look weak or dehydrated (or are generally acting out of character). It's also important to note that if you see tinsel hanging out of their butt, you don't attempt to pull it out yourself, according to Preventive Vet. You could be doing more damage than you think.

Tinsel is kitschy and fun, and it has a nostalgic quality many decorations don't have, but it is just too much of a risk if you have pets, so it's really best to avoid it. Plus, it's a real pain to clean up anyway.