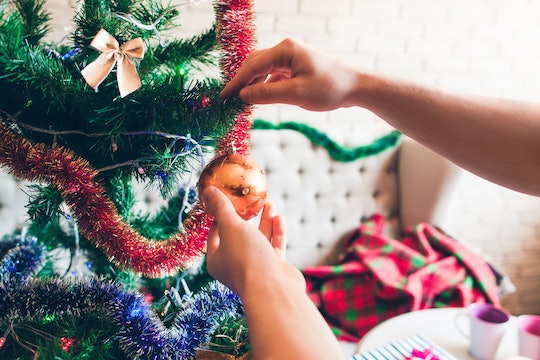 Tinsel Isn't Made With Lead Anymore, But It Can Still Be Dangerous

As any parent knows, the world starts to look a lot more sinister once you become responsible for a human life. Things you never thought twice about, like electric sockets or laundry detergent, suddenly look like death traps near the tiny hands, feet, and especially mouth of your little one, and holiday decorations are no exception. Turning your home into a festive wonderland is part of the fun of Christmas, but any new accessory poses possible dangers when you have kids around, which is why you're probably wondering if tinsel is toxic or if it's safe to have with little ones roaming around.

If you're thinking who even uses tinsel anymore, think again. According to the Fact Site, Tinsel was super popular as Christmas decor as early as the 17th century, but it did go out of style as a Christmas decor staple during the '70s when the FDA revealed that most tinsel was made of lead, reports The Atlantic. Lead is toxic to all humans, the World Health Organization explains. Lead poisoning can be detrimental to multiple body systems and is particularly dangerous to small children — it can lead to comas, seizures, and even death.

After the FDA stepped in to warn against using tinsel on Christmas trees in 1972, the holiday favorite got a reputation as a toxic holiday decoration, and it wasn't seen much for the next forty years. But the reflective decor made a renaissance in 2017, as Ideal Home reports, with Christmas celebrators having a renewed interest in shiny ropes covering their trees, and modern iterations are obviously not made of lead. But while it's great news that you can deck your halls without fear of lead poisoning, tinsel unfortunately still isn't the safest choice for decor to put in your home if you have small children or even pets.

Before you give me the same withering stare Mary gave George Bailey in It's A Wonderful Life, let me explain. Tinsel can be a choking hazard because of the small pieces that make up the long chains that looks so festive and shiny from afar, according to Web MD. If your child (or pet, for that matter) were to get hold of some tinsel and put it in her mouth, the pieces could get lodged in her throat, which you definitely don't want. As Kid's Health put it, "if it's small enough to fit in the mouths of babies and toddlers, it's too small to play with."

There are a few ways you can deal with the unexpected danger of tinsel to your little ones. Fatherly suggests skipping tinsel altogether just to take away any kind of risk. But you can also bring it into your home and use it in places where tiny hands can't reach. You won't be able to put it on your tree, but you can hang it over your mantle to make your stockings look even cuter or use it as festive wall decor. It would also look great wrapped on the railing of your staircase, which you can easily keep your kiddos away from with a baby gate.

And think about it this way: the presents under the tree will be your kiddos' main concern anyway, so don't feel bad if the tree itself isn't as glitzy as you hoped and celebrate knowing your most precious gifts are that much safer.