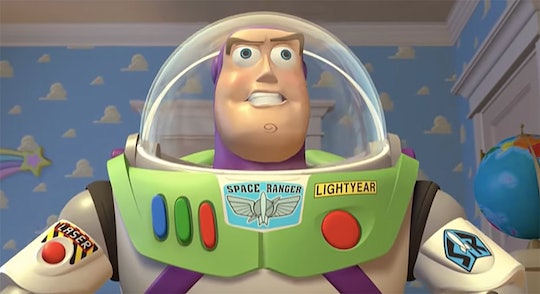 Countless parents and kids alike are excited for the upcoming premiere of Toy Story 4 on June 21, an installment that will introduce few new characters to the crew, such a frazzled spork named Forky. And in preparation for this thrilling addition to the beloved franchise, some families may be wondering whether they can watch Toy Story on Netflix and if the streaming service can take them to infinity and beyond.

In a perfect world, all of your favorite 90s movies would be on Netflix, where you could easily stream the flicks from the comfort of your own home. Unfortunately, you can't watch Toy Story 1, 2, or 3 on Netflix at this time. It's possible the Toy Story movies aren't on Netflix due to the impending arrival of Disney Plus, the company's own streaming service set to launch in November, according to Digital Trends.

Toy Story 4 is just one of the movies viewers can expect to stream via the platform, as journalists Rick Marshall and Chris Gates reported. "The studio’s upcoming movie slate — which includes Frozen 2, Toy Story 4, Star Wars: Episode IX — The Rise of Skywalker, and the live-action remake of The Lion King — will also have exclusive streaming availability on the service, with Captain Marvel becoming the first Marvel Cinematic Universe movie not available on Netflix," Gates and Marshall's report for Digital Trends stated.

If you're interested in Disney Plus, it will reportedly cost you $7 a month when it arrives in November, according to CNET. Comparatively, Netflix's basic plan goes for $8.99 a month.

For those who are set on watching Toy Story without subscribing to Disney Plus come fall and before Toy Story 4's debut later this week, there are options. You can watch the first three movies for $3.99 on Amazon Prime Video, or you can rent the non-HD version on Vudu for $2.99. Another option is to watch the movie on either Spectrum or Direct TV.

Options aside, it's probably a good idea to re-watch all three installments again in order to prepare for Toy Story's emotional conclusion. Actor Tom Hanks, aka "Woody," touched on this sentiment in a recent interview, noting that the final movie is "profound."

"When I realized what they were going for, I realized, ‘Oh, this is a moment in history,'" he said about recording the final take, according to TODAY. "The emotional range of the movies has become more and more deep and profound and affecting."

Tim Allen, aka Buzz Lightyear, echoed Hanks sentiment in a separate interview with Entertainment Weekly: "It is so emotional; it's so funny; it's so big. The idea they've come up with, I'm startled ... This, I couldn't even get through the last scene. They've got great characters but a couple of scenes toward the end were really hard to get through."

Guys, I don't know if I'm emotionally ready to watch Toy Story 4. Oh boy. Whether you wait for Toy Story to hit Disney Plus or choose to watch the franchise on a streaming service other than Netflix, I think it's safe to say the end of an era is near. Grab the tissues...