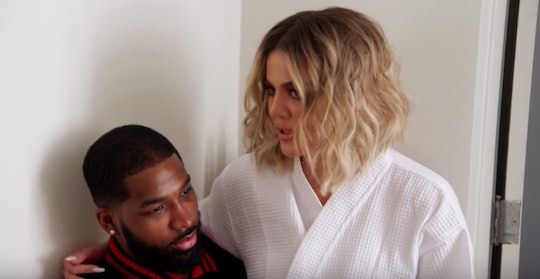 Khloé & Baby True Are Officially Back In L.A. & It Looks Like Tristan Is There, Too

It's hard to believe that it has been two months since Khloé Kardashian welcomed her first child, a daughter named True, with her partner, NBA player, Tristan Thompson in Cleveland, Ohio. But a lot can happen over the course of two months. So, now that basketball season is over and Kardashian has returned to her hometown in California, with True, fans may be wondering if Tristan Thompson is in Los Angeles, too?

Now that Thompson is free from basketball season (his team lost to the Golden State Warriors during the NBA playoffs earlier this month, according to Mercury News), it's not too surprising that think that he might want to take a break from his life in Cleveland and relax with his family on the West Coast. And that's what he's reportedly doing with Kardashian in Los Angeles, according to Us Weekly. Cameras spotted Kardashian and Thompson on Monday reportedly eating dinner together and then heading out to a nightclub in West Hollywood, where they hung out with Kardashian's younger sister, Kendall Jenner. The couple seemed to be enjoying their "parents night out," according to TMZ, reportedly staying out until 2 a.m.

It would make sense that Thompson is in Los Angeles right now. On Sunday, Kardashian let fans know on social media that she had returned to her hometown, according to People, taking to Snapchat and Instagram to show off all of the gifts she had received from her friends and family to welcome her and baby True back to California. Although Kardashian didn't explicitly say that Thompson was back in California with her, a photo on her Instagram Story of True sitting in her car seat and holding what appeared to be Thompson's hand — with the caption "Happy Father's Day" — seemed to indicate that the couple could have been traveling together.

In case some fans were confused, Kardashian had been living in Cleveland with Thompson for the past two months, according to TMZ. This was reportedly intentional — a source told People that Kardashian was "creating a life for her family in Cleveland." But who's to say she couldn't create another life for her family in Los Angeles, which is much closer to her own extended family?

But how exactly Thompson is involved in Kardashian's life in Los Angeles right now is a little uncertain. As a refresher, in April, shortly before Kardashian gave birth, TMZ and the Daily Mail each published footage that purported to show Thompson allegedly with other women on more than one occasion. And Kardashian's silence about the allegations had left some fans confused about the status of her relationship with Thompson, according to Marie Claire. Romper's requests for comment from both Thompson and Kardashian's reps regarding the cheating allegations was not immediately returned.

In the weeks following True's birth, Kardashian remained quiet about her personal life, choosing to focus on her newborn child. But no matter what was happening in her personal life, Kardashian's family members stood by her and supported her. Kris Jenner reiterated this support to People earlier this month:

I think you have to be there for your kid and follow their lead. I'm not in that relationship or in that situation, so I really trust Khloé. She's so smart, and such a great girl, and she'll figure it out.

The momager's words are nurturing and make it sound as if Kardashian is heading back into a super supportive and welcoming environment. Although it is a little unclear how long Thompson plans to be in Los Angeles, rest assured that Kardashian is surrounded by amazing people who will be there for her no matter what.