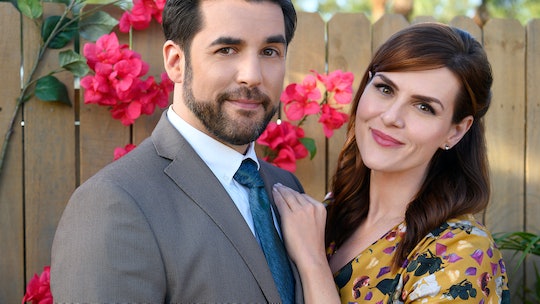 When life gives you thorns, you need to stop and smell the roses. At least, that's what The Hallmark Channel's latest romance, True Love Blooms, hopes to teach you on Saturday, Apr. 6. With a fresh lineup of spring films well on their way, fans can't help but wonder if True Love Blooms is based on a book or even a true story. Turns out, the Hallmark Original movie has some pretty interesting origins.

Sadly, if you fell head over heels for True Love Blooms, you should know that the movie isn't based on a novel. So you can't dive deeper into the story past the Hallmark film, which stars Jordan Bridges and Sara Rue, who is also the film's executive producer. However, True Love Blooms was inspired by something significant in Rue's life. In an interview with Parade, Rue explained where the story came from.

"The idea for the movie came from my childhood," Rue said. "I grew up in New York City and my parents were members of a community garden on the Upper West Side of Manhattan. I had so many happy memories in that garden as a child… until a developer bought the land, tore out the garden and built a building in its place. So that’s where the idea came from. I brought it to my friend Elias [Madias] and we developed the story together and pitched the idea to Hallmark."

According to a press release courtesy of The Hallmark Channel, True Love Blooms follows Vikki (Rue), who runs a community garden in the city, and Chace (Bridges), a real estate developer who wants to tear down Vikki's garden and replace it with condos.

To stop Chace, Vikki goes to his office with a peace offering — a lily. While he is impressed by Vikki's passion for the garden, he reveals that the project will continue, despite the many petitions and protests. Vikki then explains that the garden was her dad's passion project, which made Chace remember details about his own past. His father died when he was young and he was left to care for his mom alone.

In an attempt to show Vikki that he isn't the villain of the narrative, Chace takes Vikki to one of his construction sites, which ultimately reveals that Chace takes pride in his work and the people involved in each project. Eventually, both Vikki and Chace come to understand each other's viewpoint and along the way, the two fall in love. But, is it enough to navigate them through their difficult impasse? You're going to have to watch and see.

Although True Love Blooms wasn't originally based on a book, it was inspired by real events. And while we don't know what happens in the movie just yet, in an interview with Hallmark Channel, Rue expressed that she wish she had someone like Vikki to advocate for her childhood garden on 96th and Broadway.