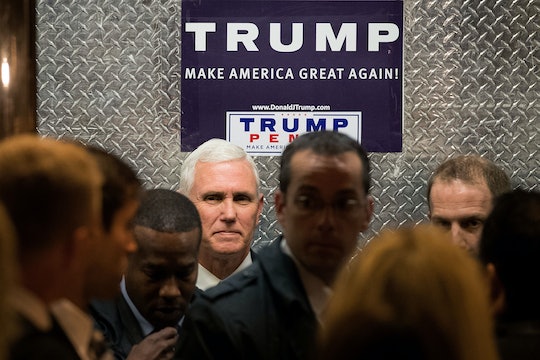 When President-elect Donald Trump first put his name into the race for the Republican Primary election, he was labeled as the "alternative candidate." But his administration isn't shaping out to be that way. Some voters might start to ask if Trump is considering any anti-establishment candidate picks — and might be disappointed by the end results. So far, based on speculation and what has been announced, Trump's cabinet is not that anti-establishment.

Throughout the primary election, Trump was presented as the "political outsider" and businessman willing to provide a fresh perspective and take on the issues effecting America. If people were unhappy with Obama's administration, then they would definitely be unhappy with any of Trump's Republican opponent's prospective administrations. One Trump won the primary, he was then painted to be the complete opposite of Hillary Clinton. Compared to Clinton, whose experience painted her as a "Washington insider" — for many voters, a Trump administration was the only way to see change. However, as Trump's transition team began making moves and announcing candidates for staff and cabinet positions, it is clear Trump's future for America is built with people with long term careers in politics. And it is still unclear if Trump is considering any anti-establishment picks other than his current unconventional advisors to round out his cabinet.

CNN labels Trump's current cabinet picks as "unconventional" at best. In the past 10 days since Trump has been elected, his transition team into the White House has not gone so smoothly — there have been reported shakeups in leadership and alleged internal disagreements, according to CNN. But that has not stopped Trump and company from making a lot of decisions thus far. According to CNN, Trump will have 4,000 government positions to fill (yikes) but his cabinet is definitely the most important. There have been a lot of names thrown around — but are there any anti-establishment picks for the top spots? We'll see. According to USA Today, the confirmed picks for filled positions are pretty much all have ties to "the establishment." Reince Priebus, Trump's Chief of Staff has been running the Republican National Committee and deals with a lot of traditional play by the books politicians. Alabama Sen. Jeff Sessions, who is Trump's attorney general has years of experience in politics was nominated to be a federal judge in the 1980's.

On the rumored cabinet list thus far, all suggested candidates who could be filling these spots have a lot in common — they're former or current senators, congressmen, attorneys — with a deeply imbedded past in politics. The New York Times shortlist for cabinet members echoes the same sentiment of people with Washington and political pasts. According to The Washington Post, at least two of the names thrown out for Trump's cabinet positions "have ties to the lobbying world" — even though Trump promised during his campaigning to "drain the swamp." But there are a few unconventional names on CNN's list of rumored candidates to fulfill the very demanding and important jobs (more on that in a second).

Breitbart editor Steve Bannon has been the most anti-establishment pick for Trump thus far. Bannon will serve as one of Trump's senior advisors — but his lack of experience and involvement in the "establishment" doesn't necessarily help him, either. Bannon's choice of headlines and subject content was never "Washington friendly" and his anti-establishment views could potentially alienate him. According to The New York Times, Bannon could be an "unrelenting advocate" for Trump's "aggressive" immigration policies. Myron Ebell, a major climate skeptic who is also a denier of climate change is expected to lead the EPA transition. While Ebell might not exactly be an outsider, he is anti-establishment compared to the last eight years with the Obama administration —an administration that so deeply believed in global warming. This is definitely a good thing for people who voted Trump in based on his anti-establishment promises.

If Trump decides to pick any anti-establishment people for his cabinet, he might run into some issues. According to CNN, cabinet positions require confirmation from the Senate. If there is one cabinet member that the senate does not approve of, it could result in some conflict. Therefore, Trump has the best bet of surrounding himself with anti-establishment people through his White House staff. In the upcoming weeks, there will be a lot of speculation pertaining to Trump's cabinet who will hopefully deliver on the promises he kept while campaigning. However, the rumored picks so far feel very establishment based.