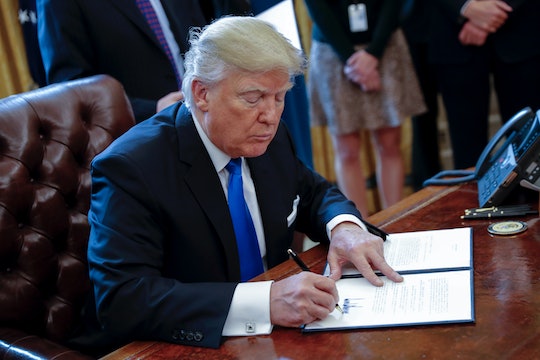 On Monday, President Donald Trump's administration temporarily banned the Environmental Protection Agency from issuing any new grants or contracts. The agency has been barred from sending contractors new work assignments or task orders, according to the Associated Press, and the agency is not allowed to issue press releases or social media updates during the ban. Since all of that certainly sounds foreboding for the environmental agency, many are wondering: is Trump going to get rid of the EPA? Can he? And what would a move like that mean for the next generation? The White House has not yet responded to Romper's request for comment regarding whether he will eliminate parts of the EPA.

Fortunately, according to Slate, Trump can't actually abolish the EPA without approval from Congress, and getting rid of the EPA would violate other established laws. However, that doesn't mean that the Trump Administration can't do a lot of damage to the EPA, and that should concern parents both in the United States and abroad.

According to Vox, many expect Trump to cancel President Obama's executive orders on environmental issues, such as his ban on coal leasing or his order requiring that federal agencies rate their impact on climate change. A majority vote in the House and the Senate could also nix any rules the EPA put in place after May 2016, thanks to a law called the Congressional Review Act, which could affect existing landfill emission standards, offshore drilling rules, the oil and gas industry's methane standards.

The Trump Administration could also try to limit the EPA's power by administering severe budget cuts in several areas — and those budget cuts could be snuck through Congress with a simple 51-vote majority if they're part of the budget reconciliation process. By hindering the EPA's spending power, Trump could easily limit the EPA's ability to work. Even now, by enabling a temporary freeze on the EPA's spending, the agency is stuck in "a holding pattern," as one EPA contracting officer described it to Salon.

Trump may not do away with the EPA altogether, but the agency's work could be critically hindered for four years. That's a time span that the world — and future generations — simply can't afford right now. 2016 was the hottest year on record, and this is the third year in a row that has slashed past heat records.

The prospect of slightly warmer winters in places like New York or Chicago doesn't seem quite so bad, but the effects of climate change go much deeper than that. According to CNN, the droughts we've seen in California and other areas of the world are a harbinger for the decade-long droughts our children will see in the future. Drier forests mean more wildfires, like the one in Fort McMurray, Alberta last year that drove 80,000 Canadians from their home and led to the deaths of two teens fleeing from the flames.

Ocean temperatures have risen by more than one degree Fahrenheit in the last century, which means future generations may not have a chance to explore international treasures like the Great Barrier Reef. By 2050, grain prices could double, and food prices are likely to increase as global agricultural supply dwindles. By the end of the century, we may have up to 20 more tropical storms and hurricanes each year (which could lead to natural disasters that take many lives).

We are the last generation that can put an end to climate change, so we [must] address climate change. ... Climate change is happening much, much faster than we think. The consequences could affect the full range of human needs — health, food, water and national security.

Climate change is a force whose effects we're already seeing, and as one of the largest world powers, the United States has a responsibility to curb its impact on the world as much as possible — not lessen much-needed regulations in an attempt to score a few more manufacturing jobs. That's a short-term solution that, in the end, will create far bigger problems for generations that aren't all that far in the future — and our kids frankly can't afford the repercussions of governmental climate apathy.