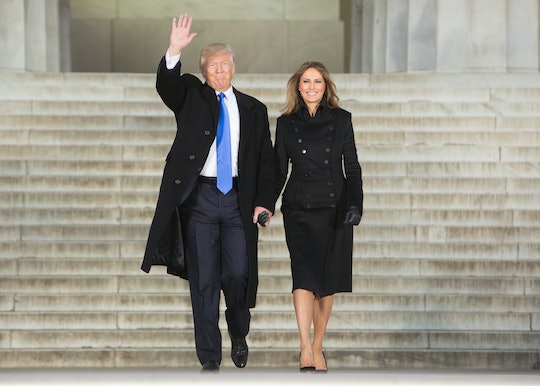 President-elect Donald Trump really loves to be the best at everything. He has the "best words," wrote the best book (The Art Of The Deal, in a tie with the Holy Bible, apparently), and will almost certainly be expecting to have the best inauguration. Unfortunately, Trump's inaugural concert in front of the Lincoln Memorial was not, actually, the first of its kind, as he claimed. So... yeah.

Trump and his family descended on Washington on Thursday to kick off the weekend of festivities. The president-elect and his wife Melania arrived at Lincoln Memorial just after 4 p.m., appearing on stage to the tune of the Rolling Stones singing "Heart of Stone" (which perhaps does not bode well for the future of the Union, but never mind). The afternoon had a surreal feeling to it, with Three Doors Down performing and Trump awkwardly rocking side-to-side sort of in time with the music. Actor Jon Voight spoke in honor of Trump, who told the cheering crowd that God had "answered their prayers" by sending Trump to lead the country. Other performers took to the stage, including country singer Toby Keith (exuberantly drinking from a red solo cup between songs), YouTube favorites The Piano Guys, and the Frontmen of Country. After a few hours of stiff rocking back and forth, Trump took to the stage to address the crowd:

This started out being a small little concert, and we decided to do it in front of the Lincoln Memorial — I don’t know if it’s ever been done before.

President Obama enjoy an inaugural concert in 2009 in front of Lincoln Memorial during his "We Are One" inauguration festivities, with performers like Beyoncé, Bon Jovi, Mary J. Blige, and many more. The concert featured a full 22 stellar performers lining up to honor Obama, like the actual Bruce Springsteen (as opposed to a Bruce Springsteen cover band, who were set to play at a Washington party to celebrate the inauguration but bowed out) and music legends Stevie Wonder, James Taylor, and U2. Not exactly a forgettable night. Or so we thought.

President George W. Bush also celebrated his inauguration with a concert at Lincoln Memorial in 2001, with Ricky Martin and Jessica Simpson headlining the concert.

And then there was this relatively amazing moment in history: Bob Dylan singing "Chimes of Freedom" on the steps of the Lincoln Memorial to celebrate President Bill Clinton in 1993.

Trump's inaugural concert might not be the first to honor an incoming president on the hallowed steps of the Lincoln Memorial, but he did manage to be the first at something else: he erected a massive, neon, "Make America Great Again" sign to sit directly in front of one of the most respected, historic buildings in the country.