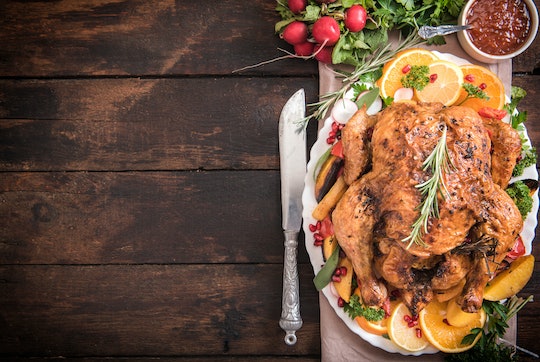 Everything You Need To Know About How Tryptophan Impacts Your Pregnancy

Tryptophan is as synonymous with Thanksgiving as pumpkin pie and glossing over history in favor of buttery mashed potatoes and creamy green beans. The post-turkey nap is a time honored tradition in the states, and by now, it's fairly routine to associate the sleepiness with the amino acid tryptophan. It's also a popular supplement purported to help with relaxation and, you guessed it, getting a good night's sleep. If it's some sort of medicinal wunderkind, could it have uses for pregnant women suffering from stress and anxiety? Is tryptophan safe during pregnancy, or should you skip the extra serving of turkey?

Tryptophan is essential in many of the body's processes. It is a unique amino acid that is crucial in the synthesis of serotonin, protein, and crosses the blood brain barrier, according to the Journal of Tryptophan Research. It is one of eight amino acids that must be consumed in your diet to be bioavailable in your blood to begin it's work, and it's also the amino acid that's found in the lowest concentration in your body at any given time. Because of its relationship with the synthesis of serotonin, a lack of L tryptophan in the system can disrupt mood, sleep, and alter behavioral patterns. However, because of risks to the fetus, specifically risks to their developing brain, L tryptophan supplementation is contraindicated for pregnancy and breastfeeding. But what about consuming tryptophan in a natural way, like your grandma's roasted turkey?

I spoke with certified nurse midwife Jennifer Austin of South Texas to get a clinician's point of view, and to ask her if tryptophan is safe during pregnancy. She tells Romper, "Tryptophan is absolutely necessary during pregnancy as it's a building block for the proteins that are making your little one, and because of a woman's shifting moods with pregnancy, the serotonin function of tryptophan is needed to keep up production. But, you can get what you need from food. Supplements are under regulated and dangerous, and there's a risk that the tryptophan could alter the serotonin release to the point that it affects blood pressure. It's not worth it."

Austin suggests eating pumpkin seeds and drinking soy or whole milk, which are good sources of naturally occurring tryptophan and also nutritional powerhouses in their own right. Meats and turkey are also full of the amino acid, and if combined with milk, packs a one-two punch of not only brain building amino acids, but also filling you up and keeping you full for a long time. This also helps keep your blood sugar steady and your moods even.

Just remember, if you're hoping to catch some extra Zs outside of Thanksgiving, tryptophan supplements are not the way. The supplement L tryptophan was actually taken off the market in 1990 because hundreds of people developed a condition called eosinophilia-myalgia syndrome, a disease that can result in multiple organ failure. In total, 37 of those people would eventually succumb to their illness. The supplement has a laundry list of drug interactions ranging from drugs you would take for seizure disorders to cough syrup. While it came back on the market with a huge warning label in 1994, it is still widely considered one of the more dangerous supplements because of its power to cross the blood-brain barrier.

But Thanksgiving dinner? You know what this means — turkey and Swiss paninis for everyone. Stock up on that tryptophan and definitely on that bread from Panera that has the pumpkin seeds on the top. I can't remember which one that is, but it's tasty. You could also get a decaf PSL on the side and pretend the pumpkin in it is real. This is how you win pregnancy this Thanksgiving.