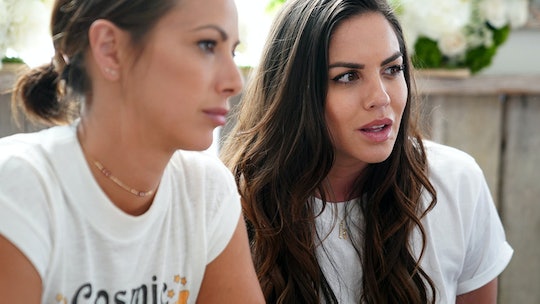 Here's Where You Can Catch Up On 'Vanderpump Rules' Season 6

Did you miss out on watching Season 6 of Vanderpump Rules when it aired on television? If so, there are still plenty of ways to watch the Bravo reality series online — including some of your favorite streaming services. Whether you don't have a cable provider and want to catch up before diving into Season 7 or you simply want to relive every moment, then you're probably wondering if Vanderpump Rules Season 6 is on Hulu or Netflix.

Sadly, you won't be able to stream Vanderpump Rules Season 6 on Netflix. The reality show has never been available to watch online through the streaming titan. However, the sixth season of Vanderpump Rules has been available to watch on Hulu since Nov. 2018. In addition to Seasons 1-5, Hulu has all 21 Episodes of Season 6, the juicy three-part reunion specials, and the Secrets Revealed Episode, which is filled with incredible never-before-seen footage. This means that you get to catch every messy breakup, makeup, and hookup that the show has to offer — and trust me, Season 6 is one you don't want to miss.

Don't have a subscription to Hulu? Well, there are still other options available if you are dying to watch the sixth season of Vanderpump Rules online.

While Hulu is the only subscription service that currently has Vanderpump Rules Season 6 available online and you can no longer stream full episodes on Bravo's website, you can always try to purchase the season or individual episodes — and they're all relatively the same in terms of price point.

The sixth season of Vanderpump Rules is available for purchase on YouTube, Amazon Video, iTunes, Google Play, and Vudu starting from $1.99 per episode and $17.99 for the whole season. But, if you want HD quality, you'll have to buy the individual episodes or season for a dollar more each. Regardless of source — whether you choose to stream or buy Season 6 — at least you'll be ready for Season 7.

Once you've consumed every detail from Season 6 of Lisa Vanderpump's reality series, you'll be undoubtedly itchy for Season 7, which is currently airing on Bravo — and you might be out of luck if you don't have a cable provider. Because the seventh season isn't finished just yet, you can't watch it with a normal Hulu subscription and while you can watch the first episode of Season 7 for free on Bravo's website with ads, you will need to sign in with your cable provider to watch everything else.

That being said, there are alternative options such as Hulu Live TV and Sling TV, which lets you watch television in real time without a traditional cable service. You can also purchase episodes or buy a season pass on Youtube, Amazon Video, iTunes, Google Play, and Vudu to own the seventh season as it airs. But, if you are bent on watching Pump Rules on Hulu, then you'll have to keep re-watching Seasons 1-6 until the seventh season is released on the streaming service a few months after the season finale.