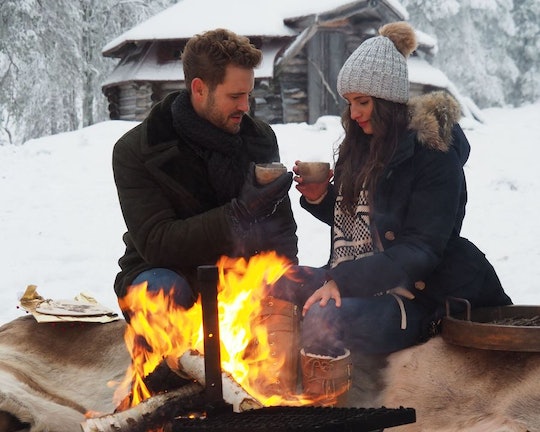 One of the running themes in Nick and Vanessa’s relationship this season on The Bachelor has been their locations. Nick currently lives in Los Angeles and Vanessa is a dedicated Canadian from Montreal. Every time the topic of relocation for one of them has come up, neither seems very willing to budge on leaving their respective homes, which could be a big factor for the couple if she does end up getting that final rose. So is Vanessa single after The Bachelor?

The contestant has a lot of pride for both her hometown and country, and from the looks of her Instagram, she’s still living there, working with her students and being the amazing human being fans got to know throughout the season. Of course, just because Vanessa is still living at home in Canada doesn’t necessarily mean she’s single, but from a logical standpoint (and not hopeful and romantic), it would seem that way.

Even though Nick told her he would be willing to make compromises to be with the woman he loves, he also recently moved to Los Angeles, presumably to work on his modeling career. And now he’s going to be on Dancing With the Stars, another TV opportunity that keeps him where he is — rather than moving to any colder, northern climates.

If Vanessa wins The Bachelor, it unfortunately doesn’t necessarily mean that she’s still with Nick now, long after filming ended. On her Instagram she recently posted a photo with her students with the caption: "So proud of my students! Stay tuned for our very special project." That could only mean that she’s definitely still living in her hometown. She also posted a photo a few weeks ago working out at a gym tagged as Centre de Solution Santé, which is in Canada.

I want to believe in true love and all that The Bachelor does for new couples, but the sad truth is that even if they seem deeply in love on the show, once the cameras stop, reality could hit hard and the couple may realize that it just won’t work for them. Former Bachelorette Andi Dorfman (and technically Nick’s ex) talked to ABC’s Nightline shortly after her season of The Bachelorette had ended and recalled how things changed once the cameras stopped rolling. “I remember, after they yelled ‘cut,’ they gave us our cell phones and the first thing I did was get [Josh’s] number,” Andi said. And just months after the finale, the couple ended up calling it quits.

Granted, that doesn’t mean that Vanessa and Nick’s relationship will meet a similar sad end, but if she’s still living in Canada and Nick is living in California doing the DWTS thing, then where does that leave them as a couple who’s supposed to be engaged? We'll find out soon enough when the After the Final Rose special premieres immediately following the finale.