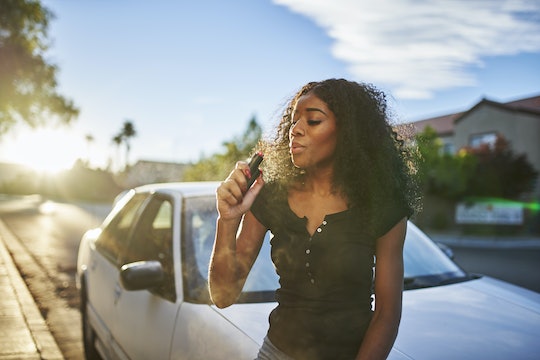 You Really Don't Need To Vape Around Your Kids, According To Experts

I am super proud to say that I am a former smoker — with all the emphasis on the word former. Quitting was one of the hardest things I've had to do, and if you’ve also quit smoking (or tried to quit smoking), you know what I’m talking about. Not only is there a mental barrier to quitting, but your body physically hurts and goes through withdrawals if you’ve been smoking long enough. It even causes depression and anxiety. Desperate when I first quit, I looked up vaping. But one question I had was, is vaping around kids safe? I felt like I saw a lot of parents vaping around their families and I wanted to make sure I was taking all the precautions for whenever we had a kid, or if I was just around children. I also wondered whether vaping was safer for you than actual smoking, as well as how vaping worked. What is in that liquid?

According to Live Science, vaping works by turning the liquid into a vapor, which you inhale into your mouth and lungs. But in that liquid are chemicals, not just tobacco. And I’m so glad I didn’t start vaping and I just kept going on with my quitting smoking cold turkey.

Dr. Gina Posner, a pediatrician at MemorialCare Orange Coast Medical Center in Fountain Valley, California, tells Romper in an email interview, "The problem is that vaping hasn’t been around as long, so we don’t know the long-term effects of exposure like we know with cigarettes." But she says doctors "are seeing cases of vaping-associated lung problems that have been showing up in the hospital ... I would treat [vaping around kids] like regular cigarettes and strongly recommend parents not to vape around their kids. We just don’t know enough about its potential firsthand and secondhand effects, but one can safely assume that it is not good to be inhaling chemicals into our lungs." Whether our own lungs, or our children's lungs secondhand.

Additionally, Dr. Danelle Fisher, a pediatrician and vice chair of pediatrics at Providence Saint John’s Health Center in Santa Monica, California, says that even though theoretically, less particles from vaping would make it seem safer than smoking cigarettes around children, it's still not safe. "More reports are coming out about how passive exposure to vaping smoke can have potentially deleterious effects on children. Given the lack of clear understanding of the risks, it is not safe to vape around children," she tells Romper.

So it seems like it's best to play it safe when it comes to vaping around children. Though we don't know enough about it quite yet to officially make a report, it's definitely better to be safe than sorry. If you're trying to quit, try using the patch or gum instead, or reach out to a health care provider.

More Like This
Is It Good For Babies To Be Exposed To Germs? It’s Complicated
Spread Some Christmas Cheer In Your Child’s Bedroom
20 Stocking Stuffers For Kids Under $20
New Study Finds Brains Of Teens Who Lived Through The Pandemic Aged Faster