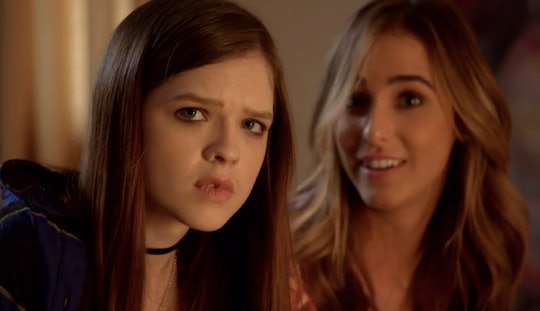 It might be a little jarring after an entire month of sappy holiday movies on cable to sit down and watch the latest Lifetime movie Web Cam Girls. It's pretty terrifying which is why you might be wondering if Web Cam Girls is based on a true story or not. According to the network, it's not based on any specific IRL story, though the premise of the made-for-television is something that, tragically, does happen.

Web Cam Girls is about a girl, named Carolyn, who "cams" for extra cash, which mean she records herself on her computer stripping or doing other sexual things for cash. Her little cousin Alex gets worried when Carolyn disappears and assumes the worst: That she broke the cardinal rule of "camming" and met one of her clients.

So, Alex, and her mom, played by Days of Our Lives star Arrianne Zucker, set out to investigate Carolyn's disappearance on the "Dark Web" and find the guy who kidnaps cam girls.

Zucker told Media Village about the role, "You hear these stories and say, ‘That happens?' Of course it does! It's shocking to hear, but I'm not surprised because of the freedom on the internet and the Dark Web." She added that it's important for parents to monitor their kids' behavior online, but knows that's hard to do. “Some moms can't keep an eye on their kids at all times, so I'm hoping by sending this message kids will make good choices and help each other. I know there are kids that do that," Zucker stated.

Despite its somewhat dramatic name, the dark web does exist. The Daily Dot explains:

The main characteristic of the dark web is its anonymity, which makes it appealing to a number of actors. Like all innovative tools, the dark web is an instrument to shady and illegal activities, such as child pornography and the sale of drugs, firearms, and stolen credit card numbers.

There are legit uses for the dark web, especially when it comes to journalists and whistleblowers. But Lifetime's not exxagerating — a lot of dangerous, illicit things go down on the dark web. And women are especially vulnerable. In August, Chloe Ayling, a model, for example, was lured to Milan under the guise of it being a paid photoshoot. Instead, she was kidnapped and then put up for auction on the dark web, according to the Daily Beast.

One former cam girl told the Inquistr that she had a man recognize her on the street once. The outlet reported, "When he said that he knew her from the webcam job, she ran away and told him to leave her alone. The same guy came to her house and damaged the paint on her vehicle."

Then again, other women enjoy making money on the side doing digital sex work. Cosmopolitan spoke to a cam girl and reported:

While it's totally possible they do recognize her and just don't run up to her for autographs, she says she's never been recognized on the street.

So although Web Cam Girls isn't based on a specific story, the plot isn't too far out there.