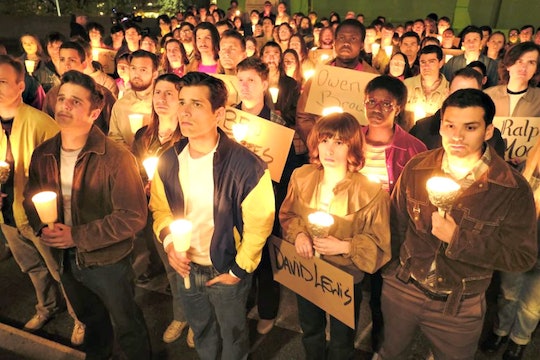 'When We Rise' Is Based On Real People

There's no way you're going to be able to miss When We Rise, the four part ABC miniseries starring Mary Louise Parker, Guy Pierce, Whoopie Goldberg, Rosie O'Donnell, and a whole slew of other big names when the special debuts on Feb. 27. The series will chronicle the LGBTQ civil rights movement and while it's likely going to be very powerful and moving, it's also important to remember that it's also not fiction — When We Rise is based on true events, which were chronicled in a memoir of the same name by Cleve Jones.

Jones, who will be played by Pierce, is an LGBTQ activist who was friends with Harvey Milk and was also on the forefront of the HIV/AIDS crisis. He founded the San Francisco AIDS Foundation at the very very beginning of the pandemic and later raised awareness for HIV/AIDS with the NAMES Project AIDS Memorial Quilt.

All of the other characters are real, too. Goldberg plays the first openly gay woman at the Department of Health in San Francisco. Parker will portray Roma Guy, a women's rights activist who not only founded the San Francisco Women's Building (a shelter for battered women), but also was at the forefront of changing the way the world talks about homelessness and redefining it as a public health issue. She also fought for healthcare in California and continues to fight for important issues even to this very day.

Rachel Griffiths, from Six Feet Under, will play her wife Diane, who co-founded the Women's Building and also worked as a HIV/AIDS nurse at San Francisco General Hospital at the height of the crisis.

The miniseries, with a different director for each episode (Gus Van Sant, Dee Rees, Thomas Schlamme, and Dustin Lance Black, respectively), will also feature transgender activist Cecelia Cheung, played by Ivory Aquino, and Ken Jones, an African American community organizer and vet who faced racism within the LGBTQ movement in real life, played by Michael K. Williams. As you can tell, the series will attempt to present a complete look at the movement from its inception and through all it's ups and downs.

What's most compelling — if you have to choose something about the series — is that many of the characters portrayed in the series are still alive. Despite all the progress in the LGBTQ community, whether its gay marriage or fighting for HIV/AIDS medicine and research, the movement is still young. And the fight is still on, even today.

This show couldn't have come at a better time. The miniseries will air less than a week after the current administration lifted protections for transgender students in schools. It's a time when many Americans are facing the fact that all of the rights we fight for, and especially those of the LGBTQ community, aren't guaranteed. They're won, by people like Jones, Cheung, and Guy. It's going to be worth watching.