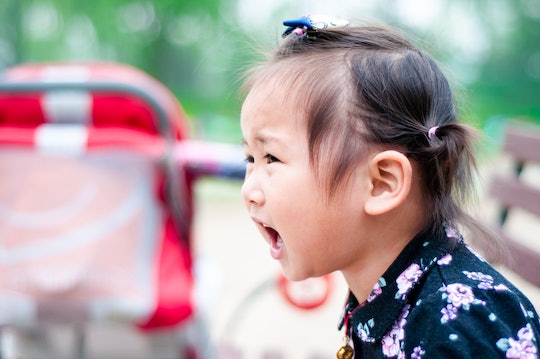 How To Tell If Your Child Is Anxious Or Just Bratty, According To Experts

You're standing in the middle of aisle 13 at Target and your child is face-first on the floor, kicking and screaming. You ignore the staring strangers and bend down to tell your kid in a polite-with-a-hint-of-edge voice to stand up and knock it off. You try many honeys and sweeties, and then you try saying, "OK, bye!" (Spoiler alert: it doesn't work.) You want to chalk it up as a temper tantrum, but seeing your kid's tear-stained face, you wonder if it's something else. Is your child anxious or just bratty, and how are you supposed to tell?

Kelsey Torgerson, childhood anxiety and anger management specialist in St. Louis, Missouri, tells Romper you need to look for context clues, like “What is the situation going on before their behavior started?” or “How long does the behavior last?”

“Typically, I would expect children are choosing to be bratty to be able to switch it off once they get what they want,” Torgerson says in an email interview with Romper. “For a kid with anxiety, you would see this come up in the same types of situations over and over again, and it would be harder for them to come back to normal functioning. You might see them on edge in other situations as well, or just generally notice that they have a hard time calming down.” Torgerson says kids with anxiety might also have a hard time falling asleep, or dealing with school and transitions.

Dr. Oksana Hagerty, an educational and development psychologist who serves as a learning specialist at Beacon College in Leesburg, Florida, tells Romper in an email interview that it is also important for parents to understand that behavior is less voluntary than you might think.

“Meltdowns and tantrums are usually a response to a problem, for example, a delayed gratification or an inability to communicate needs to parents,” she says. “Whereas anxious reactions emerge as a response to a threat — real or imaginative.”

Hagerty points out that physical symptoms might also emerge when a child’s behavior is the result of anxiety, including increased heart rate, shaking, sweating, shortness of breath, dizziness, and/or nausea. “[But] tantrums and meltdowns, while physically quite pronounced, usually do not involve physical symptoms of this combination and magnitude.”

When it comes to anxiety, Dr. Carole Lieberman, a California-based psychiatrist, tells Romper it is important for parents to be comforting in their approach in order to help a child explain their anxiety. This can be done through words or even drawings. Even if the cause of a child’s behavior is simply brattiness, Lieberman says it’s crucial to figure out what’s going on.

“When a child is being bratty, there is often an internal cause, such as feeling hungry, sleepy, or constipated,” she says. “There may sometimes be a personal external cause, such as being jealous of another child getting more attention or getting a toy. It is harder to comfort a child who is being bratty, because they typically don’t want to talk about it — they just want to act out. Still, it is important to try to understand what is at the root of this behavior so you can try to fix the situation.”

It may or may not lead to a nighttime glass — or two — of wine, but, hey, I hear it has loads of benefits anyway.