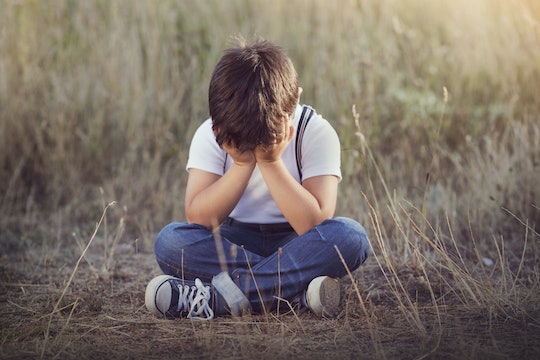 The 12 Worst Ways To Respond To A Toddler Tantrum

I’m no parenting expert, but I have a 2-year-old toddler so I’m starting to understand (and even get a handle on) toddler meltdowns. I’m a bit of a sucker for them, actually. My son has these round, wide eyes, so whenever they fill with tears I basically turn into a puddle. Still, I know that giving in every time isn’t what’s best for either of us long-term, so I’ve practiced various methods of managing and diffusing tantrums. In the process I've discovered some of the best and some of the worst ways to respond to a toddler tantrum since, as you can imagine, some ways of dealing with flailing arms and legs and flying toys and overall disaster are better than others.

Of course, tantrums can strike pretty much anytime or any place, though if kiddos typically within earshot are any indicator, stores with aisles are frequent culprits. Grocery stores, drugstores, and even Target (dang it, Target, you sexy, fluorescent-lit siren. I can’t resist you, even though I know chances are good that at least one member of my party will be in tears at some point during the excursion.) are all potential locations for full-on meltdowns. In other words, nowhere is safe.

Public tantrums are indeed the worst, so while some of these responses are bad everywhere (hello, first two on the list), some of them are especially awful when we’re out in public. If you've yet to experience it for yourself, just read the following and take my word for it (and know that I'm forever jealous of you).

More Like This
12 Helpful Tips For Hiking With Kids
15 Adorable CoComelon-Themed Costumes You Can Buy Or DIY
18 Spooky Disney Songs To Make The Ultimate Halloween Playlist
Dr. Jill Biden Just Delivered Some Frank, But Powerful, Advice On Motherhood