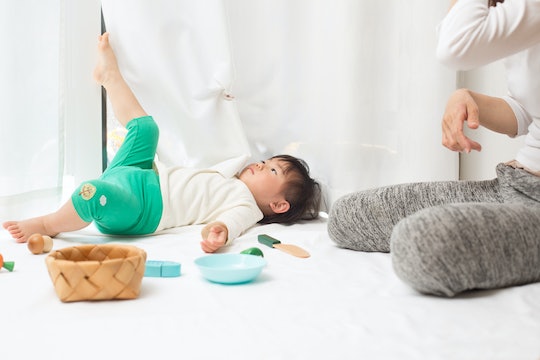 12 Things Your Toddler Wants You To Know About Their Tantrums

I used to think the hardest part of parenting was surviving the newborn stage, because the beginning is such a steep, unforgiving learning curve. Then my baby became a toddler and I realized I was wrong. When my daughter first started having tantrums, I desperately tried to understand what she was attempting to communicate. I would have killed for a user manual, or even just to have a basic idea of what toddlers want you to know about their tantrums.

What's interesting is how different those tantrums can be. My daughter's tantrums were extremely emotional; less about flailing around on the ground in extreme anger and more about being paralyzed by her emotions. In those moments, I usually just had to sit them out with earplugs firmly in place. My son, on the other hand, is all about the drama. This kid prepares himself for a tantrum, looking around to make sure there's enough space so he can throw himself onto the floor. He's even sunk to his knees, hands in the air, shouting "No!" at the top of his lungs. It's pretty hard not to laugh at him, honestly.

That being said, I'm now more tuned in to why my kids might be losing their cool and infinitely more aware of what their tantrums might mean, than I was in the beginning. Toddlers aren't just losing it for no reason; they are usually trying to communicate their emotions or feelings the only way they know how. If you ask me, these are 12 things your toddler wants you to know about their tantrums, that they just can't tell you (yet):

More Like This
What To Do If Your Toddler Keeps Taking Off Their Diaper At Night
Julia Fox’s Apartment Tour Is Peak Mom Realness
When Does A Baby Recognize Their Father? A Pediatrician Explains
40 Valentine's Day Outfits Your Girls Will Adore Showing Off This Season
What Parents Are Talking About — Delivered Straight To Your Inbox