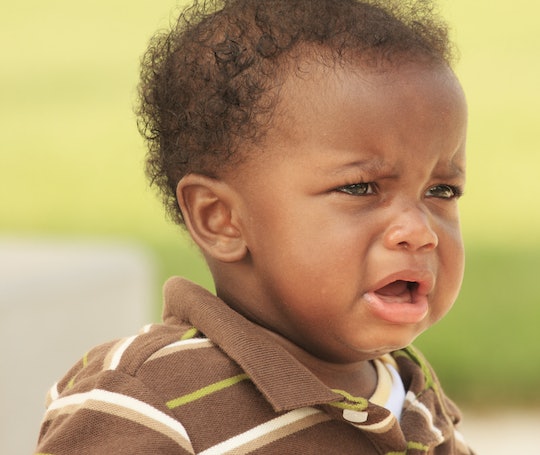 Until your kid develops substantial communication skills, and can adequately convey their emotions, tantrums are a very real, very frustrating, very common thing. Sure, there are multiple ways to deal with a toddler tantrum without ending up in a puddle of your own tears, which usually starts with attempting to understand what your kid is trying to say via ineffectual kicks and screams and yelling, but it's difficult to maintain your composure and patience in the midst of that yelling. So. Much. Yelling. Still, it's worth the effort, because there are plenty of things your kid is trying to tell you when they're acting out, that demand (and honestly, deserve) your attention.

I vividly remember the first time my kid threw a tantrum, and I was beside myself. I was mostly frustrated, somewhat scared and at a loss as to what to do or how to make him stop. I didn't want to act out irrationally, I didn't want to leave the scene and wait for him to calm down, but I didn't want to make the situation worse. Since my son was unable to talk to me in complete sentences, I was at the mercy of a quick google search and the art of internally screaming until the tantrum subsided. In other words, it sucked.

Still, regardless of how horrible a toddler tantrum can be (or how embarrassing or frustrating or anger-inducing they can be) there's a reason for the outburst. Just imagine what your kid must be feeling when they're acting out, because as tough as it is on you, I guarantee you it's equally if not more tough on them. There are multiple reasons why a kid throws a fit; reasons that definitely surpass, "They just want to drive me clinically insane, one terrible tantrum at a time." Because your kid's brain isn't fully developed, their communication skills are lacking and their reality can be perplexing and acting out irrationally can seem like, well, the only rational way to go.

Which is why attempting to understand what your kid is trying to tell you when they're acting out, is paramount. In order to get to the core of the tantrum, and sufficiently end it in a healthy, calm and supportive way, you have to try to figure out what your kid is trying to tell you. In some instances, your toddler's tantrum could be an attempt to tell you these nine things so, you know, big, deep breath mom. It'll all be over soon.