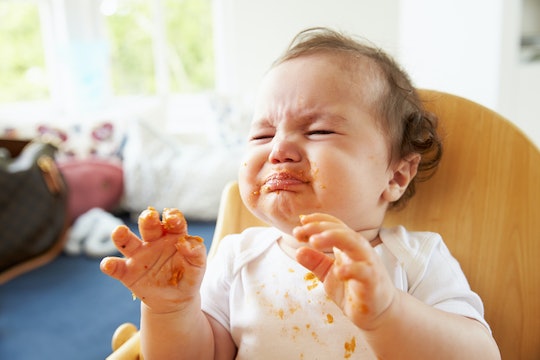 The one thing I have never looked forward to when it comes to parenting a child, is the inevitable tantrums. I know how bad I could be (and was) when I was a kid, and I've seen a some intense tantrums at the grocery store. Would I be able to handle tantrums as wonderfully as my own parents? Would I be able to deal with them publicly, the way that kind mom in the cereal aisle did? Turns out, the answer is yes. In fact, it's not only yes, but I've learned to appreciate the funny things about tantrums that, in turn, have made them less scary and more hilarious.

Sure, my child throwing herself on the floor and kicking and screaming about the color of her cup isn't that funny. Neither is her yelling at me for food when I am dishing up a plate in front of her. Like, literally right in front of her. In two seconds, she'll have what she wants but, nope, that's two seconds too long. Still, when time smooths over the edges of toddlerhood, I can look back see even the worst kind of tantrum had some hilarity to it.

As mothers, and humans trying to navigate this crazy world in general, there are moments when the best thing you can do is just laugh. Maybe not right then. Maybe not at the precise moment something horrific or at least mildly annoying is happening. But, eventually, if you can laugh at the bad stuff, you'll make it through parenthood just fine. So, with that in mind, here are a few of the absolutely horrible parts about toddler tantrums that, it turns out, are pretty hilarious:

More Like This
15 Products To Make Your Bathroom More Toddler-Friendly
12 Helpful Tips For Hiking With Kids
Sex And Mom Guilt: When I Date Someone New, Am I Cheating On My Kids?
Simplify School Mornings With These 10 Hacks For Parents & Kids