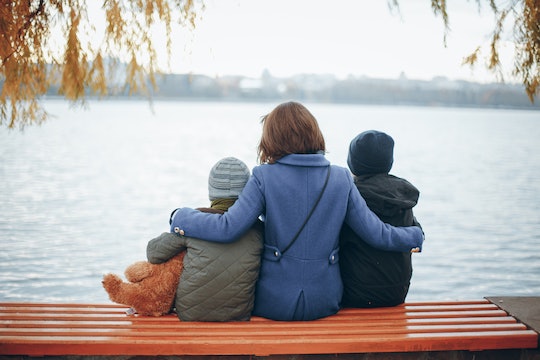 Is A Second Child Really Easier? This Study Might Change The Way You Think

When I was pregnant the second time around, I was told life would get easier. I think it's safe to say that most of us mothers heard similar versions of the same song; you know more now, you won't be as nervous, the older one will help with the little one. To be honest, this was sometimes true for me. But sometimes not. And apparently that's not that unusual. A new study looked at whether or not your second child is going to be easier than your first, and the results might surprise you. Or they might just confirm something you already know.

Australian sociologist Leah Ruppanner had a special reason for wanting the answer to this all important question. She was the mother of one and starting to consider having a second child. And as she was trying to make her decision, she kept hearing the same response; it's easier with your second. So she pulled together some fellow professors from the University of Melbourne and put the theory to the test. Ruppanner and her colleagues culled through 16 years of data collected from more than 20,000 Australians as part of the Household, Income and Labour Dynamics survey, Ozy reported. And here's what she found; your second child is just as stressful for your mental health as your first.

So here's the problem with the concept of the second child being easier than the first; researchers noted that expectant mothers reported equal amounts of stress leading up to the birth of their second child, and that after the child was born their anxiety doubled. Just like their number of children, coincidentally enough. The report, which was published in the Journal of Marriage and Family under the title Harried and Unhealthy? Parenthood, Time Pressure, and Mental Health, found that the pressure does not ease up as the children grow and become more self-sufficient either. Which actually makes sense; as a mom of four I can tell you from experience that each child comes with their own distinct set of worries for a parent, worries that multiply and expand for each individual child.

Ultimately, being more prepared does not guarantee that you will, indeed, be better prepared. It does seem rather ridiculous to generalize when it comes to having babies or to say that every second child is going to be easier because of these reasons that have nothing to do with that little person's personality. Besides, I think sometimes people forget that everything doubles when you welcome a second baby except you. As a parent, you will be expected to offer the same love and attention and care you've already been sharing with your first baby, just double the amount.

No wonder the Seattle Times noted that families are decreasing in size in the United States. It seems not everyone was willing to buy the hype.

It's just a good idea to go in to parenting a second child with a clear idea of what might lie ahead — a path that is not guaranteed to be easier or more difficult than that of your first child. It's simply a path as yet untraveled.