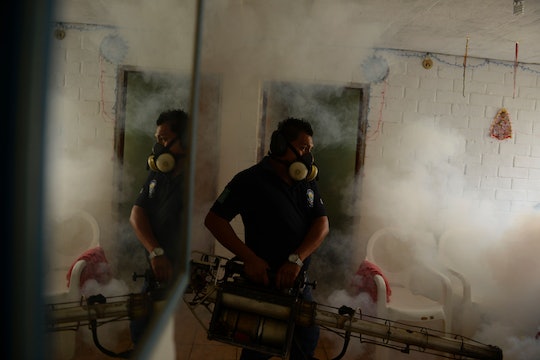 Is Zika Virus Contagious? The Virus Has Come To The U.S. Virgin Islands

The Aedes aegypti mosquito is a hell of a bug — it transmits a slew of mosquito-borne diseases, from dengue to chikungunya to yellow fever, and lately, it's been host to the notorious Zika virus. Zika's symptoms are similar to those of dengue, but the new virus carries a much bigger risk for pregnant women, as growing evidence is linking birth defects to pregnant mothers who have contracted Zika in their first or second trimesters. Women who are pregnant or who many be considering becoming pregnant may be wondering what their sphere of worry should be — namely, if their co-worker gets back from a Caribbean vacation, should they be worried? Is the Zika virus contagious? Thankfully, you can't pick it up from a nearby carrier, according to Vox.

Not really, at least not in the same sense as a cold or a flu is contagious — there's no need to put that medical mask on. Zika is mainly spread by mosquitoes, who will draw blood from a person with Zika, get infected, and then spread the virus to the next person they bite. However, there's a small amount of evidence that people with Zika may pass the virus on to others through sexual intercourse, according to Vox. Evidence is also pointing towards the scary reality that mothers may be able to spread the virus to their fetuses, which experts are linking to the rising rates of microcephaly in infants in Brazil. Microcephaly causes an underdeveloped brain in babies, which leads to cognitive delays and a shortened life expectancy.

The growing concern has caused El Salvador to recommend women hold off on pregnancy until 2018, and, in the U.S., the Centers for Disease Control and Prevention issued a travel alert for women of childbearing age, telling them to avoid countries with Zika, according to the BBC. Researchers have yet to weigh in on a connection between symptomless pregnant women with Zika and infant microcephaly, but there is still an elevated risk.

Anyone who isn't pregnant doesn't have much to worry about — only one in five people develop symptoms, and even those are fairly mild (symptoms include fever, rash, headache, joint pain, and conjunctivitis), according to the BBC. The main risk is further spreading the disease; a person who's been infected in Colombia on vacation can be bitten by a Florida mosquito and start the spread there.

Those who become infected with Zika but aren't pregnant shouldn't worry. Scott Weaver, who has been studying Zika for eight years and directs the University of Texas Medical Branch in Galveston, told Vox:

We think the maximum incubation period is 12 days. Let's say you get infected on the last day of a visit to Brazil. You might go 12 days from then until you start developing symptoms — or no symptoms but having the virus in your bloodstream that could infect the fetus. That period lasts about a week or a little longer. That would take you out close to three weeks. We'd expect the virus would be gone from your system by 21 days. Therefore, if you got pregnant later, it's unlikely that you'd transmit the virus to your fetus.

While there's no need to snap a medical mask on or distribute hand sanitizer, Zika is definitely a concern for women who are pregnant or attempting to become pregnant. Pregnant women should take precautions to protect themselves from Zika. It's a scary virus, but the more you know, the better prepared you can be.