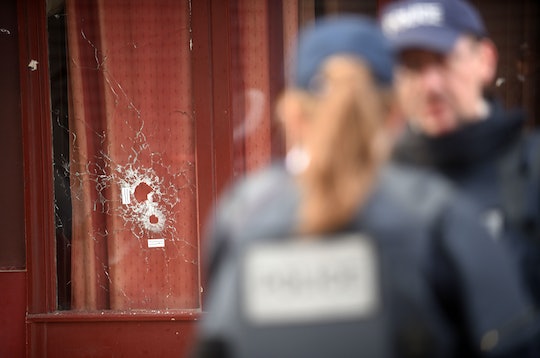 On Friday, gunmen and attackers armed with explosives attacked Paris, killing over 120 people in six different areas throughout the city. And though details are still flooding in about what exactly happened in Paris, many witnessing the events go down had one thought: Was ISIS responsible for the Paris terror attacks? If you ask the militant terrorist group and French President François Hollande, the answer is a definitive yes.

Calling the attacks "an act of war" that was coordinated "with inside complicity," Hollande pointed the finger at ISIS, while ISIS themselves released a statement claiming they were behind the attack, which led to the deaths of over 100 people in one location alone. (The Bataclan concert hall, where the band Eagle of Death Metal was playing Friday night.)

The group claimed that all the attacks were coordinated, and made use of eight attackers (at least seven of whom were confirmed by police to be suicide bombers).

Prior to ISIS releasing the statement claiming responsibility, the terrorist group also released a video warning France that it would continue its attack on the country if the militants continue to be targeted. Said the group in its video:

As long as you keep bombing you will not live in peace. You will even fear traveling to the market.

Earlier on Friday, prior to the attacks, the United States launched airstrikes that reportedly killed "Jihadi John," otherwise known as Mohammed Emwazi, the ISIS militant who was seen in several videos executing Western journalists. Authorities said they were "reasonably certain" that the member of ISIS was killed in the strikes.

President Barack Obama pledged support for France following the tragic attacks Friday, vowing in a press conference that the U.S. will help "bring these terrorists to justice."