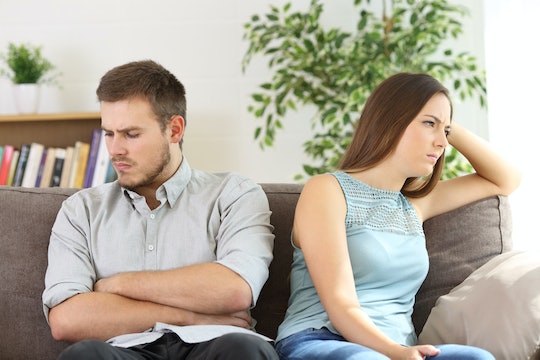 It Might Be OK To Argue In Front Of Your Kids If You Do This One Thing, Experts Say

Most parents have read the old adages about arguing in front of their kids — it's a major no-no. In most cases, for good reason. Because kids want to feel safe and secure more than anything in this world, and seeing their parents argue could certainly make them feel as though that security is threatened. But perhaps it's the way parents argue, and not the act itself, that needs to be considered. A recent article in The New York Times by author Adam Grant argued that it's OK to "fight" in front of your kids, as long as you're careful about the way you interact. (It's important to note here that most uses of the word "fight" actually mean to disagree or argue, and do not include physical abuse.)

According to Grant, a professor of psychology at Wharton University, children need to learn how to argue effectively using "thoughtful disagreement." Grant pointed to a 2009 study by Notre Dame University that looked at how conflict resolution affected the 235 families with children between the ages of five and seven who were involved in the study. As Grant wrote in an article for The New York Times:

Children need to learn the value of thoughtful disagreement. Sadly, many parents teach kids that if they disagree with someone, it’s polite to hold their tongues. Rubbish. What if we taught kids that silence is bad manners? It disrespects the other person’s ability to have a civil argument — and it disrespects the value of your own viewpoint and your own voice. It’s a sign of respect to care enough about someone’s opinion that you’re willing to challenge it.

When parents hide their every day conflicts and disagreements (which are obviously completely normal for people living in the same household) from their children, they aren't giving their children helpful examples of conflict resolution.

Of course, the way parents argue makes all the difference in the world. Dr. Gordon Harold of the University of Cardiff told Good Morning America that parents should avoid arguing in a way that makes a child feel as though their emotional stability is threatened. Cardiff points to a three-year study published in May that tracked 300 families to look into the way parental conflict affected children. Dr. Harold found that the children observed in the study suffered from watching parents fight in a less than productive way.

When children are threatened at an emotional level they're showing increases in negative symptoms such as depression, anxiety, aggression, hostility.

The worst types of disagreements and fights for children to witness, according to Dr. Harold's research, involved intense or aggressive verbal fights, physical altercations, name calling, and the "silent treatment," all of which tend to be ineffective or abusive forms of arguing.

On the flip side of that coin, Dr. Harold notes:

Arguments that are dealt with effectively that are conducted calmly that show clear messages of negotiation and resolution have positive implications for children.

Adam Grant's observations support the concept that arguing "well" in front of your children is actually healthy for their development. It helps them learn to be tolerant of other opinions, learn how to argue effectively, and also potentially grow to understand that disagreeing or arguing with someone doesn't have to feel like the end of the world, according to Grant's article in The New York Times.

We can also help by having disagreements openly in front of our kids. Most parents hide their conflicts: They want to present a united front, and they don’t want kids to worry. But when parents disagree with each other, kids learn to think for themselves. They discover that no authority has a monopoly on truth. They become more tolerant of ambiguity. Rather than conforming to others’ opinions, they come to rely on their own independent judgment.

Grant offers four tips on the best ways to argue in front of your kids:

Parents magazine offered a few more tips on how to keep children feeling from feeling emotionally threatened during an argument.

At the end of the day, if your children see you and your partner having a healthy debate and coming to a resolution, it will teach them that listening to others is a positive thing. That speaking up for themselves in a respectful way is always a good choice.

And that their parents can disagree and still keep them feeling safe.

More Like This
Experts Explain Whether It’s Safe For Your Baby To Sleep On Your Chest
Can You Breastfeed After A Breast Lift? Experts Explain
New Report Shows 80% Of Pregnancy-Related Deaths Are Preventable
There’s A Reason Your Baby Always Falls Asleep While Breastfeeding