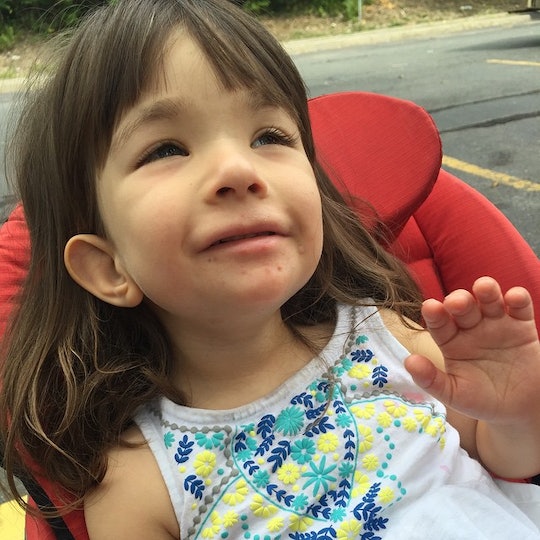 I Long To Hear My 6-Year-Old Daughter's Voice

There are so many things that are different about my daughter Esmé — most, but probably not all, stem from her four separate genetic mutations. There are the scary differences — the seizures that started in infancy, the breath-holding spells, the repeated infections, the poor growth — things that directly threaten her health and safety. There are the differences that might otherwise seem concerning, but just don’t make it to the top of the list of concerns — her feeding tube, her inability to walk, her poor peer social skills, her complete disinterest in playing in typical ways. There are the magical differences — her teaching herself how to read, her intimate connection with certain kinds of music, her ability to smile through her challenges. And then there is a category all its own: the fact that my 6-year-old daughter doesn't speak.

Esmé is functionally non-verbal, but, like me, she loves language. She taught herself to read a large number of words by age 4. Now, at 6 years old, she is able to read full sentences. However, she cannot write or type without tremendous support. We are able to communicate by using cards with words on them by offering options or allowing her to respond to yes or no questions. This has been a tremendous help in our ability to understand and respond to her needs — if a bit arduously. However, it does not allow Esmé to spontaneously engage in communication.

I struggle with Esmé’s wordlessness. We have limited functional communication that addresses only the wants and desires I think she might have. So, I can ask her, “Esmé do you want to go for a ride Target with Mommy?” and present her with the Yes and No cards. But, what if she wants to go for a ride to her grandmother’s house? Or if she wants to watch one more show, and then go to Target? What if she wants to ride in the car, but only if we listen to The Muppets soundtrack on the way? We don't have words for that.

Since I can only predict what she might be thinking, I cannot confirm her desires or explain why we cannot do something. I know she so often wants something that I am not understanding — I can see in her eyes the willing of me to grasp her thoughts. Sometimes I am convinced that the line between her brain and my own blends just enough that I can read her mind — just a bit. But other than my unconfirmed fantasy telepathy, Esmé cannot freely make requests, express her ideas, or ask questions.

I long to hear Esmé ask me questions about the things she wonders about our world. I ache to hear describe her dreams, to understand the inner workings of her imagination. I wonder constantly how words would sound tumbling out of her mouth.

Don’t get me wrong, I feel so fortunate that we have a system to communicate anything at all with my child — especially considering that no prognosis we’ve ever received gave us much reason to hope for such things. Before we had the word cards and began breaking her life up into 20 questions, Esmé would regularly cry for hours out of frustration. She would get so angry that on average once a day she would hold her breath until she turned blue, pass out, and, often, had a seizure as a result. Which, when you imagine what it must be like to not be able to communicate any of the thoughts inside of you — from the beautifully abstract to the most basic need for a bathroom — seems like a totally proportional reaction.

I know that I should enjoy any and all communication with my daughter, and I do. I know that had we not thought to see if she could read, we might still be living in darkness, unaware of anything about what she knows and wants and likes. But also? Also I long to hear Esmé ask me questions about the things she wonders about our world. I ache to hear describe her dreams, to understand the inner workings of her imagination. I wonder constantly how words would sound tumbling out of her mouth.

For a year or so she said one sound only: "Mama," her sweet voice wrapping around that word of that nestled into my heart. She babbled it, but also used it appropriately, in reference to me. She would call out for me every morning. But then, after a particularly horrendous round of seizures when she was 18 months old, the sound of my name disappeared for months.

I can imagine the sound of her voice — I do imagine it, like a small voice inside my own head, a little girl sitting next to my own inner voice, a voice I animate as looks cross Esmé’s face, as she does things I try to make sense of, as she communicates in the ways she can. Esmé does vocalize, so I know the edges of what her voice might be like if she could speak to me. She might whisper to me in her breathless voice, as I carry her in to bed, “Mommy, tonight I want to dream I’m flying.” She might lean out the window of the car, clapping her hands together against her forehead as she does when she’s excited, and, out of nowhere open her mouth wide and confidently demand that we “stop to play at the playground now!” She might ask to switch shows from Big Block Sing Song to Choo Choo Soul, her voice small and squeaky with just the slightest nasal undertone. She might yell out for me to, “Come here now, Ma!” her voice scratching and breaking up at its edges.

Over the years Esmé has, unexpectedly, produced a few words. They are like vocal mirages — they happen out of nowhere and, often, just as quickly disappear, leaving me wondering if I had imagined them. For a year or so she said one sound only: "Mama," her sweet voice wrapping around that word of that nestled into my heart. She babbled it, but also used it appropriately, in reference to me. She would call out for me every morning. But then, after a particularly horrendous round of seizures when she was 18 months old, the sound of my name disappeared for months.

Mama came back at some point, and eventually, she added other sounds to her repertoire — deep guttural "g" sounds, a "stch" or "tsh" sound. These make up the world of sounds she produces. Some are unrecognizable, but understandable, like when she gets so angry that she says something that sounds like "ticket, ticket, ticket" over — what we call “getting ticketed” in our house.

She has also said things that were decipherable, and repeated those words for a time, only to later drop them. Some words we've cycled through include: "nigh nigh" (goodnight), "gonnadoit" (going to do it), "hepp" (help), "Emmay" (Esmé), "Emmay room" (Esmé’s room), "tscken" (Chicken — our cat). More recently, when she fully wakes up after snuggling with me in the morning, she turns to the television and articulates, "Ah, ah, AHN" — meaning, she wants her morning cartoon, Big Block Sing Song, turned “on.”

I listen for something familiar, some sound I can tease out of the sentence, a key to help me unravel the meaning. I listen with a knot in my chest, ever hopeful that one of these times around I will understand.

There have also been times in the midst of extreme emotion that Esmé has produced almost perfectly pronounced words but only once or twice: "bubble," "Daddy," "out!" But most of the time what I hear when she does vocalize are strings of sounds, that, considering how much she understands, I can only assume to be full sentences, paragraphs, stories, instructions — complex ideas that I would do anything, anything at all, to understand. I know that in these sounds lay the hints to how Esmé understands the world, what she thinks about, and I know that in not knowing these things about her, in a way, I am missing big parts of who she is… parts that, to me, as a highly verbal individual, are so essential to how I know other people.

She is also starting to use her iPad to communicate from a set of choices. So, for example, as I was leaving the house yesterday, she was presented with a screen with the choices: Hi, Hello, What’s up?, Goodbye, Bye, and See you later. She selected one, and the little girl voice came out of the iPad and pronounced, “See you later.” I was so proud of her — and so excited by this leap forward. But also, admittedly, I felt a twinge of stand-offishness toward that canned voice… that voice that, no matter how impressively real it is, just isn’t my daughter’s voice.

I try to reassure her, “I’m listening, Esmé. I’m doing my best to understand.” And I am.

And I want to hear my daughter’s voice.

One of Esmé’s favorite times to vocalize is at night while I rock her to sleep. Something about the two of us alone in her room, wrapped in darkness, our faces just a few inches apart, our bodies curled together like two interlocked commas, brings out the flow of sounds from my daughter. Some nights she will go on and on, often coming back to and repeating the same refrain, the way I might if I wasn’t certain someone understood my point. I imagine she is telling me something important, then working around the edges of it, trying to better explain. Then she returns to drive the point home again, she says sweetly, but assertively, "Aaah acht ah tsch tsch, mamama, ah," her feet kicking against the rocking chair arm as punctuation.

I try to reassure her, “I’m listening, Esmé. I’m doing my best to understand.” And I am.

For as long as she vocalizes, I listen for something familiar, some sound I can tease out of the sentence, a key to help me unravel the meaning. I listen with a knot in my chest, ever hopeful that one of these times around I will understand. I try to open my mind to the clues she’s giving me, rather than the things the Esmé I narrate in my head might say. I listen until she runs out of steam and begins crying in frustration. I tell her, “It’s OK. Let’s rest. Mommy loves your words. You have a beautiful voice, Esmé. You can use it again tomorrow.”

Once she calms down and begins to rest, I play the sound of her voice back in my head. I cannot stop wondering what she has been trying to tell me or if she will ever be able to speak to me in a voice I understand.

And, if she can't, I wonder if I'll ever stop hoping for it.