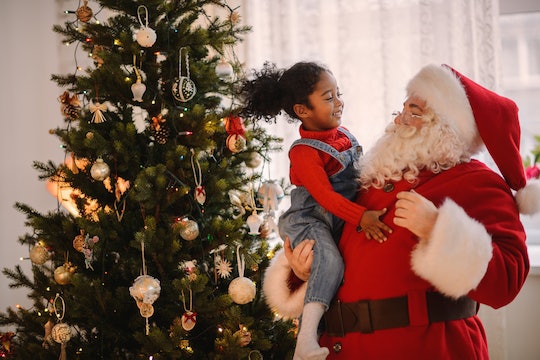 It's Easier To Believe In Santa If You're White

Every Christmas, it’s the same: Santa Claus headlining every movie. Jolly St. Nick doing commercial cameos. Kris Kringle making shopping mall appearances. The big guy in the red suit headlining every festive parade. The dude with the rosy cheeks and fluffy, white beard printed on everything from holiday cards to knee-socks to ugly sweaters. Mr. Claus is basically everywhere this time of year, and millions of kiddos are eagerly writing lists and waiting for gifts. But sometimes it’s a little different for children of color because, let’s face it— it’s easier to believe in Santa if you’re white.

I’m latina, and while I’m perhaps lighter-skinned than some, I am definitely not white. Yet I grew up seeing a white Kris Kringle everywhere around me. I learned about how St. Nick lived in the North Pole, where sunlight is scarce at best. Initially as a child, I didn’t think much about the fact that Santa was (always portrayed as) white. It was simply a fact, much like water makes things wet or the capital of Nebraska is Lincoln. I also grew up around lots of Jesus and Mary statuary that portrayed both to be white (and we all know that’s pretty damn inaccurate). And there’s also the fact that we see white folks everywhere in the media — from Tim Allen to Kurt Russell to Billy Bob Thornton to the guy in Elf — and so white ends up being kind of the default “color” or “race,” if you will, whether we like it or not.

But here’s the thing: Santa is not definitively white. Santa isn’t definitively anything. He’s a figment of our imaginations, a product of storytelling, and at best, a fun tradition for children. And while he may have been initially based off a real human (Saint Nicholas), even he wasn’t as pale and rosy-cheeked as we depict the fictional Kris Kringle. In fact, as reported by National Geographic, some anthropologists believe Santa had more of an olive skin-tone due to the fact that he was from the Mediterranean. But over time, we’ve made him out to be a white man, a very white man.

Many black and brown families struggle to afford holiday gifts, which may lead to some black and brown children wondering why Santa would give little Skylar or Chad new iPhones or a trip to Disneyland when all they got were some socks and maybe a new doll.

White children might not have much trouble believing in Santa, then, as he may resemble one of their own grandparents, or great-grandparents, or any other older person they know. But what about black children, or indigenous children, or other children of color? They might very well be among the first to question why Santa looks the way he does, or more importantly, why he looks nothing like they do.

This is not to say non-white kids don’t or can’t believe in Santa. To many children around the world, Mr. Claus is as real as you or I. He was always real to me when I was a very young child. It was great to believe that there was a magical being out there who could fly through the sky on reindeer and bring gifts to every single child. It’s hard to find anything more magical to believe in the older you get. But it does get harder to believe as you begin to age and question the world around you. And for me, one of the questions I had about the reality of Santa was why he looked the way he did. Because really, would it be so bad if Santa was three or 10 or 20 shades darker? (The answer, my friends, is no. It would be just fine.)

Despite the prevalence of Santa as The One Thing We Can All Agree On during the holidays — as a harmless and secular tradition — many white and non-white children also have other beliefs that we ignore when we act as though he is the one sacrosanct thing about December. My extremely Catholic latina grandmother didn’t even recognize Santa as a thing, and always asked me what I wanted the Baby Jesus to bring me for the holidays. Sure, some children in Nicaragua have heard about or even celebrate a belief in Santa Claus, but he isn’t as big a deal there like he is here in the U.S. Not only is Santa white, but the Santa many of us imagine — the Santa we see in our malls — is an Americanized version as well.

Black kids and other children of color would certainly have an easier time believing in a Santa that looked more like them.

Then, there are the gifts. Children are sold the idea that this Santa Claus fellow is going to come by their home and leave lots of presents if they’re good (or a lump of coal if they aren’t). While some children might make out like bandits during the holidays (scoring high priced items like iPads, new video game consoles, Apple Watches, expensive bikes), many other children are lucky if they get a small handful of presents. And while it’s not as simple as saying white kids get more gifts and kids of color don’t, there are some inferences to be made. According to Pew Social Trends, the household income gaps between white families and black and brown families are substantial, with white families making roughly $71,300 in 2014 (only surpassed by Asian families whose median income was $77,900). Compare this to black and hispanic households, which have a median income of $43,300, and it is fair to infer that some trees end up with more gifts.

If your family enjoy a more comfortable level of income, there’s a good chance your children will always have multiple presents to open Christmas day. But many black and brown families struggle to afford holiday gifts, which may lead to some black and brown children wondering why Santa would give little Skylar or Chad new iPhones or a trip to Disneyland when all they got were some socks and maybe a new doll. Growing up, my family did their best to get me gifts, but I’d be lying if I didn’t say they were sometimes knock offs of better-known brands. And I never went on any kind of Christmas vacation. It’s the kind of thing that might shake a child’s belief in Santa if they already weren’t that sold on it.

Finally, representation matters. It matters in movies and TV shows, in offices and among athletes, and it even matters in holidays. And while white children have been able to relate to the white man on their TV screen talking about bringing them presents, black kids and other children of color would certainly have an easier time believing in a Santa that looked more like them. Last year, USA Today reported on a black Santa at a mall in Memphis who was extremely popular, with children from surrounding cities coming to visit him. Some of those children may have seen a black Santa for the first time, and just maybe, he became a bit more relatable, and a bit more real for them.

Once upon a time, the U.S had never had a black president. Some believed it would never happen, and many children grew up believing that because they didn’t look like the other presidents, they would never have a shot. Barack Obama changed all that when he took office in 2008, and our generation now has plenty of black children who believe and know they can someday become president. Perhaps if we start offering more alternatives to Caucasian Santa, more children of color will find it easier to believe in him, too. And maybe, just maybe, white kids and their parents will learn that Santa doesn’t need to be white for them to believe in him, either.

More Like This
34 Instagram Captions Perfect For Preschool Graduation Photos
From Captions To Gifts, These Are All The Kindergarten Graduation Ideas You Need
17 Best Potty Training Products For Toddlers
12 Last-Minute Vacation Spots For Memorial Day