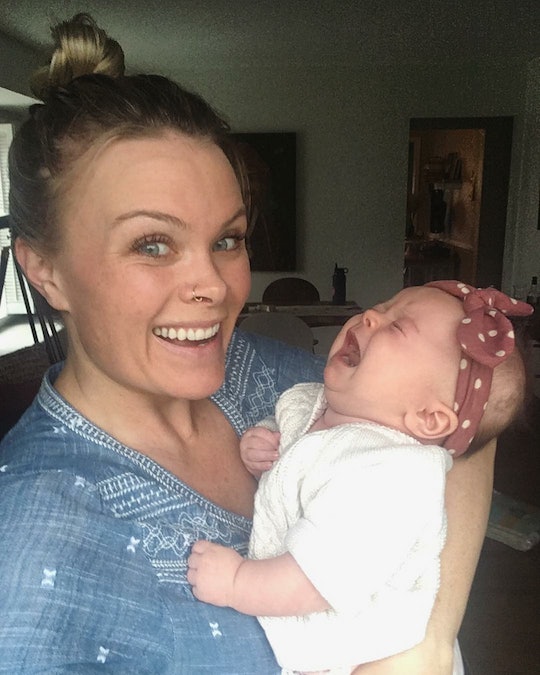 It's OK To Let Babies Cry — In Fact, It's Very Important

Before my daughter was born, I taught preschool for eight years. In talking to parents about their goals for their children, aside from the lofty academic visions of honing 3-year-old geniuses, pretty much every parent would tell me, "I just want my child to be happy."

I understood, of course. It sounds right. Happiness feels good. Happiness is one of the ways we measure our success in life. But with an extensive education in social and emotional development, I also understood that it's important for children to experience, express, and have validated the gamut of possible emotions. When we rush to fix or erase or smother, say, sadness, we are in essence telling our children it's not OK to feel sad. But, as we all know, sometimes life is just sad.

While pregnant, I wrote my unborn daughter a letter, brilliant with the wisdom of a parent, who's not yet actually a parent, assuring her that I wished her a life of happiness, but also excitement, anger, fear, exhilaration, anticipation, and sadness, because those emotions give us information about ourselves and the world around us; they propel us forward, they help us grow.

He remembered our family mantra: it's OK to cry. When our daughter cried, he would hold her, but not frantically rush to pacify her by shoving something in her mouth

I expected I would be OK with letting her cry a bit as a baby. Not out of hunger or wetness. But just in the struggle. The struggle to sit up independently for the first time, the struggle to settle herself a bit, the struggle reach that toy that's just out of reach. I would be there to reassure her, but not always to immediately fix things.

As it turns out, as with pretty much every single other plan I made, I didn't know anything.

I didn't know how much stomach would turn at each whimper or woeful cry that escaped her impossibly powerful lungs. I didn't know how it would echo inside me that I was failing as a mother and person somehow, that my sole job was to sustain a human, who did anything but cooed and smiled. The smile was the assurance that I was doing it right. Especially in public, tears felt impossible; they screamed like a siren, announcing that I was inadequate as a parent.

You see this mindset everywhere — especially in the world of sleep literature. A quick look at Google reveals The No-Cry Sleep Solution, "no-tears methods" of sleep-training, and on. It's easy to believe that you are responsible for never letting your baby cry, at the expense of your own vital sleep. (Despite alarmist science claiming cry-it-out damages babies' brains, the American Academy of Pediatrics found "no significant differences" for emotional attachment or issues between babies whose parents used graduated extinction (a form of cry-it-out), bedtime "fading," and the control group.)

Thankfully, my husband, who was not drowning in a combination of lack of sleep and postpartum depression, remembered. He remembered our family mantra: it's OK to cry. When our daughter cried, he would hold her, but not frantically rush to pacify her by shoving something in her mouth, attempting to distract her, or to drown out the sounds. He would make sure her needs were met, and then make space for the emotions. Certainly the first three months were different. She was simply navigating a brave new world, adjusting to life outside the womb. But as she grew, we (okay... I) realized, babies have bad days too. Babies have times where they have everything they need, including physical closeness, and they still cry.

Crying is not bad. Let me say it again: crying is not bad. It can definitely mean there is a need to be met. Surely, yes, that's how babies communicate so many things for which they don't yet have words. But I also now truly believe that sometimes the tears are just an articulation for how weird and big and painful it is to grow. I do not want to stifle that.

I can make space. I can let her take a moment to flounder, and, in doing so, I truly believe I'm sending a message that she's capable and that it's OK to feel something other than happiness.

One night, a few months ago, our girl was wailing and wailing before bed. She was, presumably, extremely tired. The pacifier in me, still echoing with whispers of failure as a mother, would rush to feed her yet again, even though she'd just been fed, and then lie her down as quickly as possible to limit the amount of tears. But I had tasked my husband with bedtime that night, so instead I lingered in the other room, overhearing their conversation. He held her in his arms, while she cried, reassuring her again and again that it was okay to be sad. The cries escalated, and then, suddenly, seemingly miraculously, they stopped entirely. He patted her back and said, "There you go. You got really worked up and that's okay. Now you've calmed down. I love you, little girl." He cozied her up and then laid her down to fall asleep without a peep.

I am still working on it, myself. I still feel pangs, these days as she rolls onto her hands and knees, rocking back and forth, crying with frustrating, so desperate to crawl. But now I see both what I idealistically insisted upon before birth and then what my husband modeled from the beginning of my daughter's life-- that emotions are many and varied and all valid.

I cannot crawl for my daughter. I could whisk her away or divert her attention. I could eliminate that moment of sheer frustration, so wrought with angry tears. Or I can stand by and encourage her. I can make space. I can let her take a moment to flounder, and, in doing so, I truly believe I'm sending a message that she's capable and that it's OK to feel something other than happiness.

Sometimes the moments aren't so clear. Sometimes she's crying and I have no idea why. It is hard to sit with sadness. It's hard not to fill the space with solutions and distractions.

It's hard to just let it be. It tugs at my heart. It makes me question my own value. Sometimes, it makes me cry. But even then, I remind myself, gently, lovingly, growing is hard.