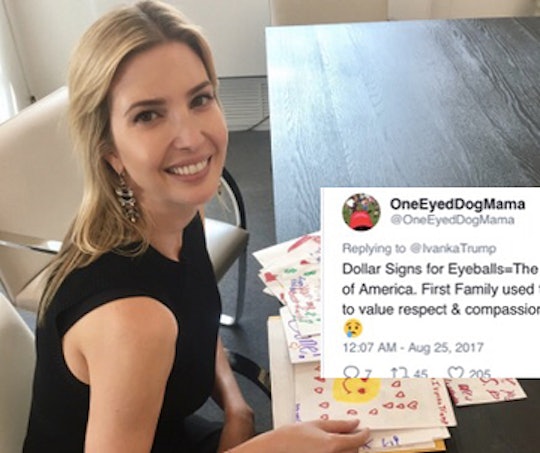 Ivanka Shared Her Fan Mail From Kids, & The…

It probably seemed like a good idea at the time; the Trump family's last, best hope, Ivanka Trump, spreading a little goodwill via social media. Goodwill anywhere has not really been the forte of her father, President Donald Trump, who tends to wield his massive influence on Twitter like a machete. His daughter tends to have a softer, gentler image with broader appeal. Or she did in the past, at any rate. Apparently not so much anymore, because when Ivanka shared her fan mail from kids on Twitter, basically nobody was willing to show up for it.

The mother of three, author, and former business icon tweeted a picture of herself sitting amidst piles of letters from children who were apparently thanking her for something, although it wasn't especially clear what. In fact, that was a point several critics made, what exactly does Ivanka Trump do? This has been the unanswered question ever since her father moved into the White House and brought her on as a trusted, though undefined, aide to the president. While she is clearly a person of influence (I mean, she did get to briefly sit in on a meeting at the recent G20 summit, which must have been pretty cool), the level of that influence, or how she plans to wield it, remain patently unclear.

Not that it seems to matter to the many children who wrote to thank her, I guess.

The letters, many of which social media users noted looked suspiciously similar to each other, were covered in hearts and thank -yous. In fact, they specifically say "Thank you, Ivanka Trump," which seemed a bit weird, no? The internet seemed to think so.

Of course, there's always that nagging question that Ivanka Trump can't seem to escape... what do you do? The fan mail writers might not seem terribly concerned, but the internet certainly seems to be.

Some critics also wondered, if it wasn't children writing these letters (which seemed to be the consensus), who wrote them?

The fan mail tweet did seem like a ploy, an attempt to distract Americans from more important issues. It may have worked for some... but others were quick to remind Ivanka of the serious concerns millions of Americans have with the White House and refused to be swayed by the cute photo op.

And I think, deep down, she knows better. Which makes it all that much worse.