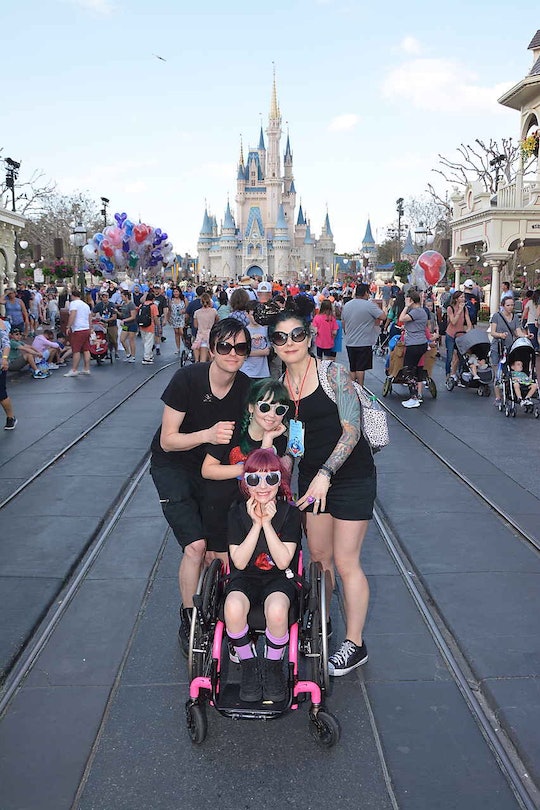 I’ve Been To Disney With & Without Kids, & I’ll Settle This Debate Right Now

Recently, the whole world read on the internet about the mom who thinks millennials without children don’t belong at Disney, per her viral Facebook post, sparking debates and memes and posts I’m still seeing about who has the right to buy a Mickey pretzel in skimpy attire and why. I have my own opinion, which is that only people who want to be at Disney should go to Disney. For most of us, millennials or otherwise, parents or otherwise, Disney can be magical, wonderful, unforgettable fun. But for those of us who do not want to be there for whatever reason, Disney can be a miserable experience. I should know. Prior to becoming a parent, my experiences with Disney were slim and unpleasant.

When I was 6 years old, my parents took me to Disney World for a day. We were in Florida visiting my grandmother. Somehow someone in my family thought it would be a good idea to take me, and my parents, a miserly couple who did not anticipate the mesmerizing hold that Disney would have on me, did not adequately prepare themselves for the consumerist desire it would awaken. Nor was I prepared for the profound deprivation I felt: only other kids got to wait on the lines for the fun rides. Only other kids got to have expensive and junky snacks. Only other kids got to meet characters or buy toys or dress up. Not me. Not with my parents. The day was disappointing for all three of us. My parents believed I was ungrateful and unappreciative, and I felt tantalized by this whole world of fun and excitement and toys and candy that I got to peek into but not participate in. This soured us all on Disney, and I did not go back for 25 years.

When I was in my early 30s, a man I’d recently started dating invited me to Disney World for a weekend. I told a friend about this invitation and he scoffed at me. “How the mighty have fallen,” he laughed, shaking his head at me. Privately, I agreed. But I liked the guy and I wanted to go. He was older than me but a little wild, and he seemed very, very cool. I was surprised that he wanted to take me to Disney World for our first weekend away, but I decided to be open-minded about it. Maybe there was something I’d been missing about Disney all those years.

I was less open-minded when he booked the whole trip without so much as consulting me and presented me with a bill for half the tab. He’d selected the airfare, the hotel, the restaurants, the transportation, the theme-park tickets and even the rides we’d go on. I had no say. All the same, I continued to reserve judgment. But when we got there, it became very clear to me that he was a major Disney-phile, a frequent flier, a tried and true Mickey fan. He was obsessed. He told me over dinner at Planet Hollywood in what was then Downtown Disney that this was his 50-somethingth trip to Disney World, and that I should feel lucky because he knew his way around the parks like the back of his hand and he’d already planned out every step of the visit. He was most excited about the virtual rides, but for me — as someone who gets chronic carsickness — that was a dealbreaker. I told him to go ahead without me, that I’d wait for him at the gate of each of the rides he wanted to go on that I could not. This was unthinkable. Even Disnerds seem to have their limits, or at least this one did: he did not want to ride the rides alone. He threw a tantrum about it and accused me of ruining all his hard work planning for our wonderful weekend. I became less and less convinced that there was anything wonderful about any of this at all. By the time we landed at LaGuardia airport after this ill-fated weekend, not only had this brief relationship died an abrupt death, but we were also no longer speaking to each other. Much later, I found out he’d eventually married another Disney freak and I was relieved for him that he was happy and even more relieved for myself that I had dodged this magic bullet.

I kept telling people we were only there because I had no choice but to be there for work, but truthfully I loved seeing this bright, colorful, musical, magical world through the eyes of my little daughter.

About five years later I was also married, with a toddler and a second baby on the way. To my surprise I learned that I was being sent to a conference for work that was being held on the Disney grounds. I decided that if I had to be there anyway, I may as well bring my family along. I couldn’t even imagine even buying tickets for the theme parks let alone enjoying myself there without my kid. So I did, and we had a blast. I kept telling people we were only there because I had no choice but to be there for work, but truthfully I loved seeing this bright, colorful, musical, magical world through the eyes of my little daughter. She ran around laughing, pointing, singing, tasting, grabbing, absolutely delighted with everything she saw and did. I was five months pregnant. It was hot. The lines were long. Everything was expensive. But my daughter’s enchantment was infectious, and despite myself, I realized I was having fun. Even though I could see how the stores were strategically positioned after the rides, how compelling it is to upgrade to fast-pass or to seated restaurants with reservations, I set aside the feeling of being manipulated for my time and my money, choosing instead to feel bewitched by the magic of Disney that had my daughter so captivated. I hid behind my status as a parent, protesting every step of the way that I couldn’t see how or why anyone would deal with Disney if they didn’t have to.

Since then, we have gone back. We’ve been to Disneyland for day trips here and there when my family and I were in the Los Angeles area, and more recently we went to Walt Disney World for an extended and very special family trip. Each of us has our own set of ears in addition to a variety of other theme-park purchases. I don’t think I’d go so far as to call myself a Disnerd or an Earhead, but every time we go, I do come away with a deeper appreciation for Disney and the lengths to which they go to accommodate as many different types of people as possible and to make truly magical experiences for all of us. I don’t think it was Disney’s fault that I had a terrible time with my parents when I visited as a child, and I certainly don’t think it was Disney that caused the breakup between my would-be boyfriend with the Peter Pan syndrome and me. It did take those trips for me to want to try again with my own family though, and it took being there with my family to help me find my own Disney magic.

I don’t resent their matching t-shirts, their his-n-hers wedding ears, their drunken giggles as the sun goes down over Epcot.

The best response I have seen this past week to all the Disney hubbub was this: “I had my kids so I would have an excuse to go to Disney World. Who knew I could have gone without them?!” I am glad I had my kids as my excuse when I wouldn’t have gone on my own, but I’m happy to say I don’t need them anymore. I may not have any plans for an upcoming Disney vacation without my kiddos, but it’s not because I wouldn’t go there without them. When I’m there, I don’t resent the childless any more than I expect them to resent me or my overtired, oversugared, overexcited, overstimulated children who need to pee a hundred times a day and who want to ride the same rides over and over and over, who spill their drinks and cry during performances and take up more than their fair share of time with each princess. I don’t resent their matching t-shirts, their his-n-hers wedding ears, their drunken giggles as the sun goes down over Epcot the way I hope they don’t resent my exposed mom-body in 90 degree heat or my kids who want to be in the front of the ride, who scream during the fireworks but refuse to leave because I’m not tired I’m not tired I’m not tired. I don’t resent the desire of childless millennials – or anyone else -- to have a break from real life just like I hope they don’t resent mine.

Part of me envies the kind of person who is carefree and laid back enough to enjoy a place like Disney on their own, without the excuse of kids. And part of me feels sad for the children of adults who actually bother to hate Disney. Sure, there is a lot to hate about Disney if you look for it, but why let that ruin the fun? I know one dad who told his kids that the Disney theme parks all closed just to get out of taking them after their friends got to go, and I couldn’t help but feel sorry for the kids that their dad was such a stick in the mud. Lots of people need a place like Disney, and I’m glad it’s there for anyone who wants to go. Shut up and deal with the other Disney-goers who probably find you as annoying as you find them and just have a good time. And if you don’t like it, just don’t go. It makes the lines shorter for the rest of us.