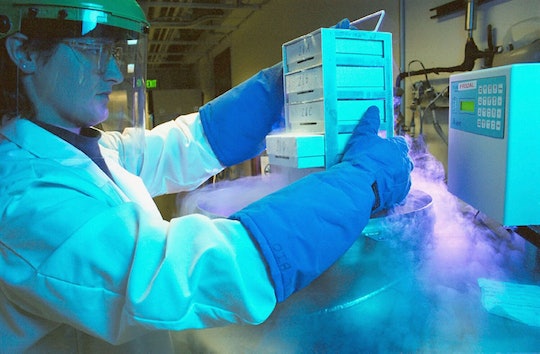 As we all know, getting pregnant isn't easy for everyone. Families who suffer through the agony of infertility woes have historically had few options at their fingertips. Adopting a child, either at home or abroad, can be an arduous, expensive process that isn't a realistic option for lower income families. But what about in vitro fertilization? A fertility option that once felt like the private domain of the very wealthy, IVF has become more accessible in recent years. How accessible, exactly? Looking at IVF by the numbers, more and more women in the United States are using it every year.

According to a 2014 annual report released by the Society for Assisted Reproductive Technology, the use of IVF is on the rise; in 2012, 165,172 women in the U.S. under went an IVF treatment at a clinic, with 61,470 babies born from these same treatments. That's approximately 2,000 more babies born from IVF than in 2011. The research points to a few key factors in the upward swing of IVF treatments across the country; first of all, women are by and large waiting longer to have babies. The national average age for a first-time pregnant woman is now 26 years old, up from 22 years old in 1980.

So who exactly is seeking out IVF (the process of using sperm for fertilizing an embryo outside of the body)? According to the Center for Disease Control and Prevention, almost seven million American women under the age of 44 years old have sought out some form of infertility service. That could mean seeking out advice, testing, ovulation medication, or artificial insemination.

As families seek out a reputable clinic for their IVF treatment, cost is naturally a massive consideration. IVF costs can vary greatly from state to state, and only 15 states have provisions for insurance providers to provide coverage for certain types of infertility treatments: Arkansas, California, Connecticut, Hawaii, Illinois, Louisiana, Maryland, Massachusetts, Montana, New Jersey, New York, Ohio, Rhode Island, Texas and West Virginia. On average, each IVF cycle costs just over $8,000, with an extra $3,000 to $5,000 for medications, and the federal government does not provide coverage for the treatments. A study conducted by RESOLVE, the National Infertility Association, found that the price of IVF was directly proportionate to the amount of clinics available; if there were fewer clinics and doctors who provided IVF services, the price went up.

For those seeking to go abroad for their IVF treatment to possibly save money, the cost can vary widely. In the UK and Australia, IVF is considerably more expensive than it is in the United States (around twice the average amount), while other areas popular with families seeking less expensive IVF treatment like the Czech Republic and Latvia cost around $3,000. The Ukraine, Lithuania, Turkey, and Hungary generally offer IVF treatment (including consultation costs) around $2,000.

More families may be employing IVF as a viable fertility resource, but the cost needs to become more uniform — not to mention more transparent.