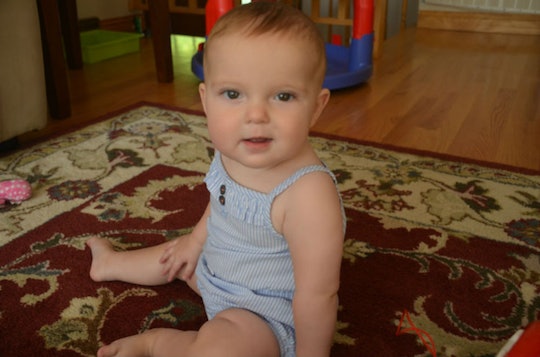 We just opened a savings account for our daughter. Being the responsible adults that we are, we figured our kid should have a savings for when she’s older, perhaps for graduation, or money for college or a wedding. Feeling the pressure of all my friends opening accounts for their babies, many whom started while still pregnant, I knew I had to get on this. I mean, she had just turned 2 and the longer I waited, the more screwed up her future would be without that squishy financial cushion from mom and dad, right? Trouble is, we have found ourselves in debt from IVF, so we can't afford to contribute to a college savings account.

Several months ago, I finally opened up her savings account by hauling a gallon-sized zip-lock bag full of change from her ceramic pig into the bank. From the day she was born, until a little over two years later, we had it mostly filled it by dropping our spare change in as we walked by her nursery. A full pig meant it was time to take it to the bank and deposit it.

I had a grand total of $65.16. The kid won’t be getting a college fund. She’ll probably be able to buy her first semester textbooks and whatever Apple has for an iPad in 2033. Maybe.

I never had a college savings. I couldn’t go off to a university like I wanted and my parents wouldn’t let me take out loans. I went to a community college for my registered nursing degree, worked a few years, and then finished my bachelor's. When I graduated high school, I received money from my parents to buy my first Dell laptop that weighed about 20 pounds and was pretty much the best thing ever.

The point is, I didn’t have that cushion and I made it just fine. And my daughter will have to follow in my footsteps. She doesn’t have a choice actually. When it costs you over $50,000 just to even have a baby, things can be pretty tight.

I have no regrets in how many fertility treatments we had to pay for —holding my daughter in my arms for the first time after six years of heartache, pain and determination was worth every penny. They say money can’t buy happiness? Those people must not know the joy of a baby after infertility. But our lives are drastically different right now than we predicted almost ten years ago when we married. With an IVF loan and three student loans hanging over us, it leaves very little left for day to day living, much less putting money in savings. What we do manage to save right now is going into an account for us to try for a sibling for our daughter later this year.

That $65 in my daughter’s savings isn’t much. And when I hear about my friends who have well over a thousand dollars saved for their kids before they hit kindergarten, it can be disheartening knowing there won’t be much financially throughout her childhood. Her clothes, toys, books, shoes: most of these are bought at consignment sales or are handed down from generous friends. But eventually she will be a girl who won’t want used things. She’ll want a cell phone and name brand clothes — her friends will have these, and I’m not quite sure how to explain to her that she was wanted so much that her parents were willing to financially ruin themselves for the foreseeable future to bring her into the world. She’s not going to care about that. She’s just going to want the damn cellphone.

It’s OK though. I hate to call my infertility a blessing because I think that’s really easy for someone to say who was successful in having a baby. Others spend twice what we did and more and it just doesn’t work for them. But infertility humbled me. It taught me to live as well as I can with very limited funds. It meant cutting costs where we could and scoping out the best deals, and discovering the frugal world of Aldi and secondhand stores. It taught me that family is more important than material objects and we could still make memories on a weekend family trip just like we could if we all wore matching T-shirts to Disneyland. It’s made my husband and I have some involved discussions on technology within our family and what it means to limit screen time from a financial and relational aspect.

Now, we are trying for a second child. I hope after our upcoming fertility treatment we will be able to slip some money every month into her savings. I want to be able to offer her something when she turns eighteen, even if it can’t be that college tuition. My hope for her is that we raise her in the way so that when she comes of age, she will have the skills, knowledge and determination to set out to create her own future, to make herself proud.

In the meantime, sorry kid. We gave you life. You’re going to have to figure it out on your own.

More Like This
A Parent’s Guide To Stomach Pain In Kids
What To Do If Your Toddler Keeps Taking Off Their Diaper At Night
Winter Travel Tips For Families
Tips to Beat Jet Lag, For You & Your Kids
What Parents Are Talking About — Delivered Straight To Your Inbox