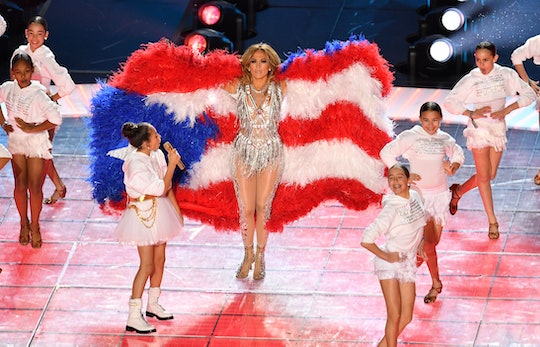 J. Lo's Puerto Rico Shout-Out At The Super Bowl Was A Message For Trump

When Jennifer Lopez took the stage at Super Bowl LIV, fireworks were to be expected (both literal and symbolic). But J. Lo's Puerto Rican flag cape at Super Bowl 2020 was so much more than just a wardrobe choice. This important gesture made this year's halftime show something especially meaningful and politically poignant.

Wearing a glittery silver ensemble, Lopez got the audience on their feet with a typically high-energy performance involving some very daring pole work and featuring such hits as “Jenny From The Block,” a mash-up of “Mi Gente” and “Love Don’t Cost A Thing,” and “On The Floor." She was even joined by her 11-year-old daughter Emme Muñiz on “Let’s Get Loud,” (if you were wondering whether the tween takes after mom in the musical department, the answer is yes).

But it was J. Lo’s rendition of “Born In The U.S.A.” that set social media on fire, and for good reason. Unfurling a feathered cape showing the U.S. flag on one side and the Puerto Rican flag on the other, Lopez timed the reveal of the Puerto Rican side for the beginning of the Bruce Springsteen hit. This was no doubt a nod to J. Lo’s Puerto Rican heritage, at least in part.

As everyone knows by now, Lopez was born in the Bronx to Puerto Rican parents. But as everyone apparently does not know, even now, if someone is born in Puerto Rico, that means they are also American citizens. And by "everyone," we mean people who really, really, should know, like, the president, who has been severely criticized for his response, or lack thereof, in relief efforts to the island after it suffered several natural disasters over the past few years.

With her choice of song and ensemble, J. Lo brilliantly used her halftime performance to school the general public on this fact, and this effort did not go unnoticed (or unappreciated).

As one Twitter user tweeted during the show, "Puerto Rico, baby. Yes, it is part of the USA. Remind those Trumper bigots."

Ad as author Christopher Moore tweeted, "Taking this opportunity at 10 million dollars a minute to point out to the President that Puerto Rico is part of the USA."

It's an unfortunate truth that Puerto Rico doesn’t get nearly enough coverage in the news. So the fact that Lopez just got a ton of people talking is a pretty huge deal. And it wasn’t just the cape, either; as Emme sang, other children were dancing in glowing orb-like structures that looked an awful lot like cages… “a possible nod to the thousands of children, most from Latin American countries, who have been detained at the border,” as Vanity Fair reported.

What J. Lo (and Shakira, too, with her amazing bilingual performance) did with her Super Bowl Halftime performance is an example of celebrity power at its best. Lopez took her moment in front of millions and turned it into an opportunity to educate, enlighten, and inspire… all while dancing and singing like a goddess.