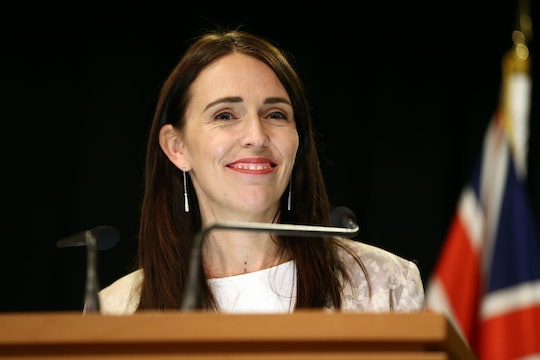 I don't often get crushes on politicians, and that's saying something because I live in Canada and Justin Trudeau is our prime minister. But I have to tell you, I've got a pretty serious mom crush on New Zealand's Prime Minister Jacinda Ardern. She just strikes me as being a real human being without a whole lot of artifice, and I think that's pretty rare in any person let alone the leader of a country. Need proof that I'm right? Well, Jacinda Ardern helped a mom with screaming kids at a supermarket with the kindest gesture. Now never doubt me again.

The newly minted New Zealand Prime Minister (she was elected in October 2017, after acting as the leader of the Labour Party) was apparently out stocking up on some groceries recently, as The Independent reported. Standing in line at the supermarket, if you can believe it — just try to imagine the President of the United States standing in line at a Countdown supermarket on Ponsonby, Aukland. Exactly.

Well, according to a woman named Helen Burness, Ardern was in line behind her friend who was having a real day of it. Two crying kids and also she had forgotten her wallet. I think we've all been there a time or two, haven't we? But perhaps we didn't have quite the same empathetic response from a world leader.

"Like we didn’t love her enough, Jacinda Ardern paid for my friend’s shopping in the supermarket the other day when she had forgotten her purse and had two screaming kids in tow," Burness tweeted on Sunday.

According to Women's Agenda, when Ardern was asked about the incident on Thursday (because please notice that she didn't encourage her team to casually share the incident and said nothing about it herself until asked), she confirmed it happened with a simple, humble "Yes." When asked why she helped, she shrugged and said, "Because she's a mum."

Being a busy mother is something Ardern would understand well since she just welcomed her daughter Neve last June, becoming the first world leader to give birth while in office for more than 30 years, according to The Guardian.

The mother the Prime Minister helped, who has remained anonymous, explained to The New Zealand Herald that Ardern is a "leader unlike any other." She told the publication, "Just when you think Jacinda Ardern couldn’t get any more lovely, low key and authentic... she goes and pays for your groceries at the supermarket, because you’ve got your shopping, have two kids with you and are about to put it all back as you forgot your wallet."

Ardern has become something of a reluctant celebrity in the weeks since the terrible Christchurch mosque attacks. In the days and weeks following the horrific attacks, she was widely praised for her empathy and her compassion, not to mention her immediate decision to ban assault weapons in New Zealand, according to CNN.

For the first time in my life I feel justified in my admiration of someone. The Prime Minister of New Zealand seems to be strong, thoughtful, compassionate, and intelligent. Who knew you could be all those things and still lead a country?