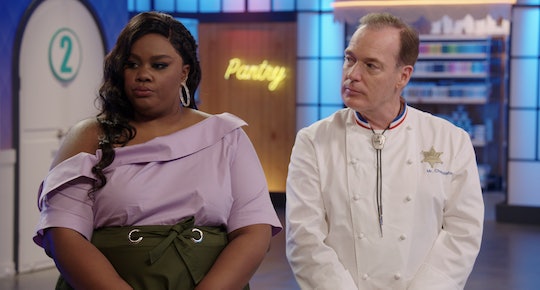 Jacques Torres Has The Secret To Nailing It, & It's About Lowering The Bar

When the frosted bell jar currently sitting over our lives is lifted, it is going to be quite the reveal. Parents across the country are spending their days trying to save cratering toddler moods, paste together collapsing schedules, and dress up the tiny catastrophes that have taken place with shiny cachaos. Life right now is, in other words, an episode of Nailed It!, the happy-go-lucky baking show on Netflix hosted by chocolatier Jacques Torres and comedian Nicole Byers.

The home bakers who compete on the show bring autodidactic energy to the challenges: elaborate chocolate and bakery masterpieces they attempt to recreate without any real know-how. When their time is up, the judges inspect the results, often collapsing with laughter at the gap between goal and reality. "Sometimes I see things during the reveal that I want to go under the table and hide myself, you know it's like, Oh my god, what did they do," says Torres, who is calling from the industrial kitchen where he has been filming his contribution to the latest at-home #naileditchallenge. "Some people are still imaginative and so funny," he says of submissions to the weekly challenge. (You can view Torres' entry in the week's challenge on Romper's Instagram account, and diagnose exactly where you went wrong with that sugar cookie.)

No matter the results, you have to look for the good, the Frenchman believes. "An ugly cake is not always a bad cake, an ugly cake is sometimes delicious," says Torres, who on the show samples each terrifying creation with a studiousness befitting his training as a French chocolatier. "We try to make people feel good about it."

And there could be no better philosophy for the global shut-in, which is of course the reason for the at-home challenge. "When life gives you lemons... you know the game," Torres says.

He is interrupted by Romper's yeller of a child, and responds with the same good humor you see on Nailed It. "I love to have the kids on the background!" he laughs as the walls of professionality tumble down like a poorly applied sheet of fondant. "That’s what’s going on when I'm home, you know, it’s non-stop."

"Pierre is now almost 4 years old and you know I give him a plastic knife and I'm making him chop things," says Torres. Nothing is perfect, but "at the end of the day he takes a look at himself and he thinks he did it himself and he’s so happy."

Torres admits that culinary travesties don't just happen in the Nailed It! kitchen, but in his own home. "When I do things with tomato sauce, oh my god, it takes me about more time cleaning than making," he says. "But you know I make them happy."

It is a good lesson for aspiring bakers and parents alike. "We don't aim for any any perfection, we aim for being together."

Nailed It! issues a new #naileditchallenge on Fridays, and shares some of the "best" creations on the Nailed It Instagram account.