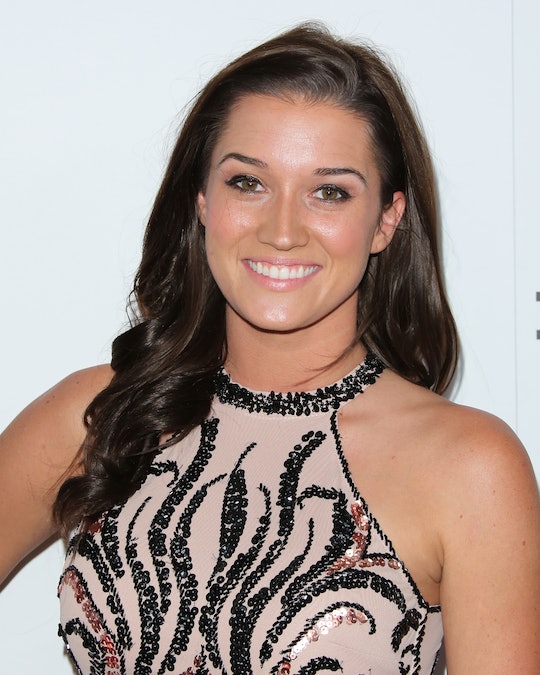 Although breastfeeding in public is protected by law in all 50 states and moms are consistently told "breast is best," somehow — on the cusp of 2020 — there are still people who treat breastfeeding as something that should be hidden away. And that's exactly what happened to former reality TV star Jade Roper after she shared a breastfeeding video on Instagram. But don't worry, she handled her mom-shamer like a champ and responded to the whole ordeal perfectly.

The Bachelor alum and her husband Tanner Talbert — whom she met on the second season of Bachelor in Paradise — have two children together. They share a 2-year-old daughter named Emerson and a 5-month-old son named Brooks. The social media influencer regularly posts updates about family life via Instagram, and considering Roper is a breastfeeding mom, it shouldn't be too surprising to see the mom of two feeding Brooks at some point.

On Dec. 28, Roper took to her Instagram Story to share a video clip of her family of four's "lazy football Sunday." She started off by showing herself relaxing on a couch while nursing baby Brooks, and then panned over the living room area — which had random piles of toys and clothing lying around. "We still have Christmas gifts strewn all over the living room," she captioned the video, alongside laugh-crying and shrugging emojis.

No big deal, right? Roper was just keeping it real about the state of her home post-holidays. Plenty of other parents are probably right there with her in the midst of disarray and an overall "lazy" vibe between Christmas and New Year's Day.

Unfortunately, one of Roper's followers decided to send her a DM for the sole purpose of shaming her for breastfeeding while on camera. The mom of two shared a screenshot of the cringeworthy exchange on her Instagram Story.

"Stop!!!! We don't want to see that. At least put up a warning," the disgruntled Instagram user messaged Roper. And her response was golden. Although Roper opted not to directly respond to the DM, she captioned an Instagram Story with the perfect clap-back:

Breastfeeding is a natural way some babies EAT. So sorry, no warning here. You see more boob in a bikini.

And all the nursing moms shouted, "Amen!"

Roper is no stranger to dealing with online trolls. Back in July, she called out Instagram users who felt it was acceptable to send her messages saying Emerson was "kind of showing signs of autism," according to E! News. "You all, these are NOT okay messages to send people," she wrote on her Instagram Story at the time, alongside screen shots of DMs. "If you all mean well, it's still not OK to say she has autism or needs speech therapy or to comment any sort of thing like that to anyone about their child. We are her parents, we have a great pediatrician, and we know her development. Comments like this really throw me for a loop."

When some followers pushed back against the mama bear putting them in their place, Roper doubled down, according to People. "I'm saying people would never come up to someone in public and say these things," Jade replied. "There needs to be some sort of internet etiquette. You don't get to go rogue because you're behind a keyboard."

A-freaking-men. Trolls, be warned: Jade Roper will not sit around and take your mom-shaming or unsolicited parenting advice.

More Like This
Chrissy Teigen Nodding Off While Breastfeeding As Miles Chats Away Is Too Relatable
Is It Safe To Pump While Pregnant? Experts Weigh In
Jinger Duggar Was Taught Motherhood Defined Her — & Then She Broke Free
The Sweetest Things Paul Rudd Has Said About Being A Dad
What Parents Are Talking About — Delivered Straight To Your Inbox