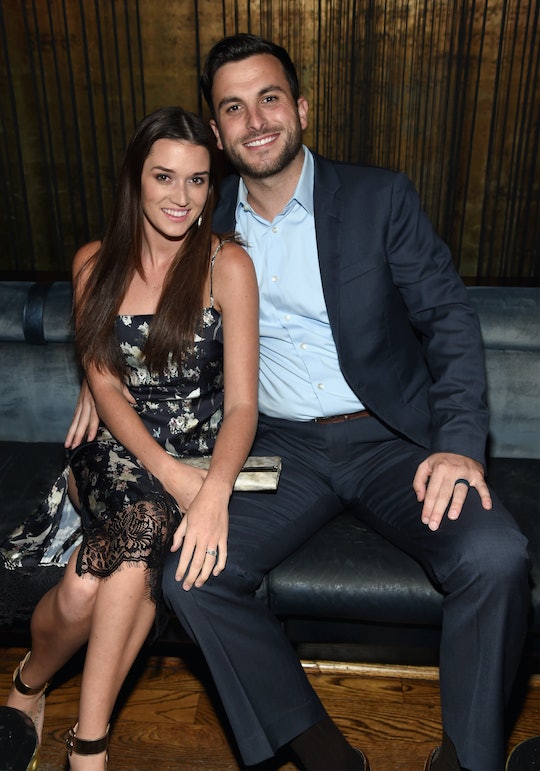 There's something about having kids around that breathes new life into old traditions in a ways that's pretty much unparalleled. And that's true even when the "kid" in question is only a couple of months old and has absolutely zero idea what's going on. Enter Bachelor in Paradise alums Jade Roper and Tanner Tolbert's pumpkin patch parenting "fail." At least, that's how brand-new mom Roper described the family's recent trip to do something so many young families love to do together every fall: pick out pumpkins, drink cider, and bask in the chilly weather. (Or at least some version of that.)

But even though the couple's baby daughter wasn't quite ready to fully enjoy what will certainly become a family tradition, the Instagram pic from the day shows this was far from an actual fail.

Because the photo is pretty adorable. In it, Tolbert snaps a selfie that shows him rockin' an appropriately plaid button-down and his wife, who's holding Emerson Avery Tolbert, who was born exactly two months ago, on Aug. 17. There's a smattering of pumpkins in the background and both mom and dad look absolutely thrilled. And then there's the baby, who looks cozy as all get-out as she snoozes in her mom's arms. "Pumpkin patch parent fail," Roper captioned the post, and set the scene in explanation:

When you both are so excited to start family traditions, but your baby only wants to nap in your arms. At least we still got apple cider donuts. #weweretherefor5minutes #newbies

Even though baby Emerson is definitely way too new to the world to be able to fully appreciate the joy of running through a cornstalk maze or choosing the perfect gourd that pumpkin patches are famous for, it's impossible to fault her parents for trying. Establishing family traditions can be one of the most exciting parts of becoming a parent. After all, these are the moments that children may very well look back on with fondness for the rest of their lives, the activities they may love so much that they'll want to do them with their own kids one day.

And that's not to mention the fact that this couple is so in love and pumped about parenting that they probably love nothing more than an excuse to hang out together with their daughter for a carefree afternoon. Case in point: Here's what Roper had to say about her love for her family in Ashley Iaconetti's podcast, I Don't Get It, soon after "Emmy" was born, according to Us Weekly:

People always say you don’t realize how much you can love somebody until you have a kid. It’s wild! ... It's just like this crazy love. It makes me love everything even more. I love Tanner more. I love Emerson. I love my dogs more. Like I thought I’d come home and I’d think, "Oh, you guys are just dogs now." But it makes me love them even more. Your heart is just so full it's unbelievable.

Also, after their unconventional courtship, perhaps the new parents are craving some family normalcy. After Roper and Tolbert on ABC's reality The Bachelor and The Bachelorette, respectively, the two met and fell in love on the spinoff Bachelor in Paradise in 2015. They got engaged on the show not long afterwards, and here's the kicker: They agreed to broadcast their January 2016 wedding on Valentine's Day of that year.